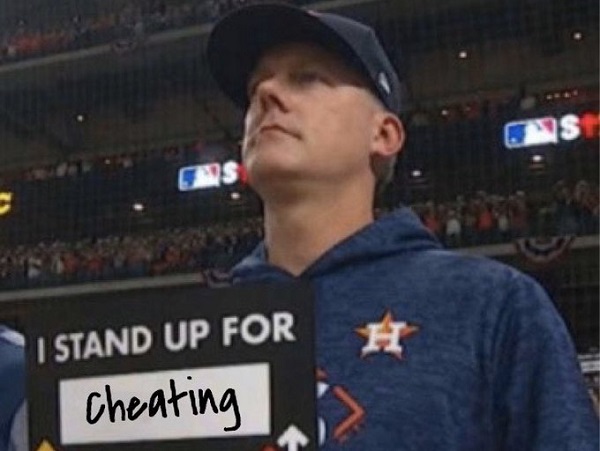 Major League Baseball found evidence that the Houston Astros cheated during the 2017 regular season, 2017 postseason and into the 2018 season, but the investigation did not mention anything about the team stealing signs during the World Series last year. However, Washington Nationals catcher Kurt Suzuki doesn’t need an investigation to tell him what he experienced firsthand.

Thomas Boswell of The Washington Post asked Suzuki this week if he believes the Astros were cheating during the World Series last season. The catcher said there is “no question” and that Nationals players could hear whistling coming from the Houston dugout.

“We could hear it from their dugout. We heard their whistling,” Suzuki said. “What are you going to do?”

In order to counter the sign-stealing, Suzuki says the Nationals changed their signs during every at-bat of the World Series. On some occasions, they even tried to change the signs in the middle of an at-bat. He said there were swings Astros hitters had in certain situations that were “so good” there was no other explanation for them aside from sign-stealing.

“When Max Scherzer has two strikes on you and he throws one 98 miles per hour near your head and you smash it — come on, nobody does that,” Suzuki said. “We got a couple of big strikeouts when their crowd was so loud they couldn’t hear. The whole thing was crazy. I got messed up on signs a couple of times, had to call time and take us out of rhythm. I kept thinking, ‘We have to go to the field and work early on our signs in the World Series just to stop their cheating.’ It’s so stupid and so wrong.”

Astros players have insisted the illegal sign-stealing stopped before last season, but Suzuki says Houston just “got better at it.” The way he spoke made it clear that his opinion was shared among his Nationals teammates.

There has been no evidence from last season of blatant banging on trash cans to relay signs like we saw with the Astros in 2017, but Houston was accused of cheating during the 2019 postseason before The Athletic blew the lid off their elaborate scheme. A report said the New York Yankees believed the Astros were stealing signs and relaying them by whistling during the ALCS, and then-Astros manager AJ Hinch denied it with an arrogant response that later came back to haunt him.

Simply put, the Astros have not earned the benefit of the doubt. There’s no reason to think they would have stopped cheating before MLB caught them and handed down punishment. The Nationals beat Houston in the World Series, so it’s not as if Suzuki’s comments are sour grapes. Why would he lie?