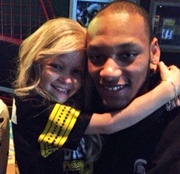 On a night that has become known for outfits nearly as much as dreams coming true, Adreian Payne made quite the statement on Thursday at the NBA Draft.

The story of Payne’s friendship with Lacey Holsworth, a young girl who was diagnosed with cancer Payne met when his Michigan State Spartans visited Sparrow Hospital, has been well documented. Earlier this year, Lacey lost her battle against the disease.

Payne has continued to keep Lacey Holsworth in his thoughts and Thursday was no different. When Payne walked up to the stage to shake hands with NBA commissioner Adam Silver, after being selected No. 15 by the Atlanta Hawks, he did so wearing an outfit inspired by Holsworth.

Adreian Payne (@Adreian_Payne) on the inspiration behind his suit. If you didn't know, Lacey Holsworth is the reason. pic.twitter.com/NlOP2mu74G

At this point, we don’t yet know what type of NBA player Adreian Payne will become. We do know one of his biggest fans is proud of him on this day.

Lacey’s mother attended the draft and was seated at Payne’s table.