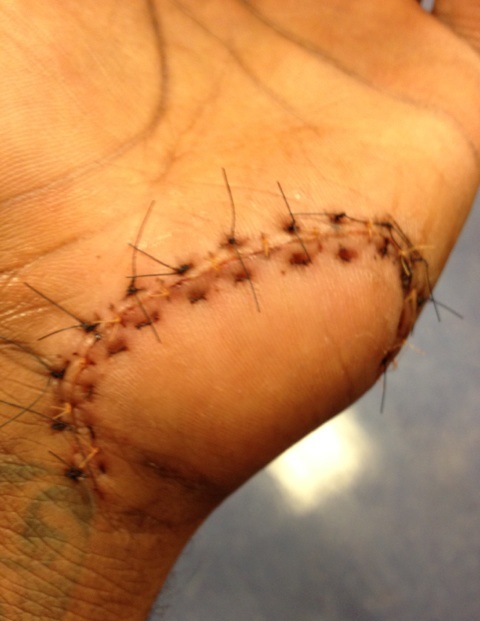 If Amar’e Stoudemire was trying to win some public sympathy by tweeting a picture of his hand full of stitches, he was successful. The Knicks forward shared the above picture via Twitter on Friday, and said “A millimeter away from my nerve. Thanks to the Most High I’m still able to heal an recover.”

“Most High” was a reference to God, and if you look at that thing, it’s hard to disagree. When I first saw that picture, I thought I was looking at a picture of the cover of “Moneyball” the book. Tell me his palm doesn’t look like the seem of a baseball with all those curved stitches.

Instead of mocking Stoudemire like I did when the story first came out, or sharing pictures of T-shirts making fun of the event, my mood has completely shifted to feeling badly for the guy. Stoudemire says he wants to play in Game 4 of the Heat-Knicks series on Sunday. Though he’s doubtful, he may get his way. I would actually cheer him if he made it back for that game rather than boo him for his stupidity. The guy made a dumb mistake and has apologized. I forgive him. It’s hard not to after seeing that.