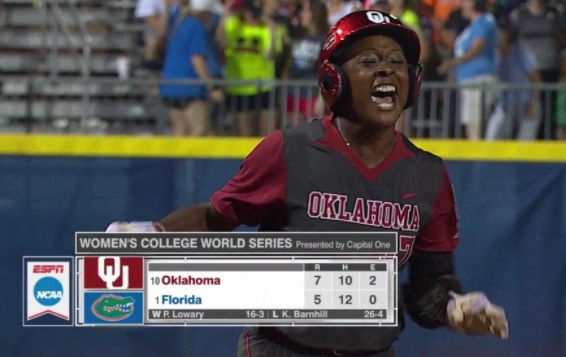 Oklahoma’s softball prevailed over the Florida Gators in the first game of the WCWS championship series on Monday, winning 7-5 in a record 17 innings.

The 17-inning game was the longest ever for a WCWS championship series game by a mile. In response to seeing his Sooners win in extra, extra innings, former Oklahoma basketball star Blake Griffin tweeted the following:

fun to watch @ou_softball compete like that. one more but maybe less innings next time

The difference in the game was Shay Knighten’s 3-run home run in the top of the 17th off Florida’s Kelly Barnhill:

Shay Knighten's three-run in the top of the 17th won it for @OU_Softball! #WCWS pic.twitter.com/uDhsQhA4nT

The Gators managed a run in the bottom half on an RBI sac fly by Amanda Lorenz, but Kayli Kvistad struck out to end the game.

The game truly was incredible. Florida was down to its last strike twice before coming back. They were down 2-1 in the bottom of the 7th with a runner on and Sophia Reynoso up with a full count. With Oklahoma’s defense playing very deep to prevent a ball over their heads, she blooped a short fly ball into left center that tied the game.

Then in the 12th, Oklahoma’s Fale Aviu hit a 2-run home run to put the Sooners up 4-2. In the bottom half, Lorenz drove a 2-out, 2-run double to the left-center gap with a 1-2 count that tied the game and kept it going. But Knighten’s 3-run blast in the 17th was too much for the Gators to overcome.

Both teams used two pitchers in the game. The Sooner surprisingly chose Paige Lowary to start over Paige Parker, even though Parker is the team’s ace and won last year’s championship for them. Lowary started, was relieved by Parker, but re-entered in relief and got the win. Barnhill started for Florida, was relieved by Delanie Gourley, and re-entered, eventually taking the loss.

Barnhill surrendered five earned runs and two home runs in the game. She entered the game with only nine earned runs and three homers allowed in 184.2 innings all season, so the powerful Sooners nearly doubled those totals in just one game.

The second game of the best-of-3 series will be at 8 p.m. ET on Tuesday night.