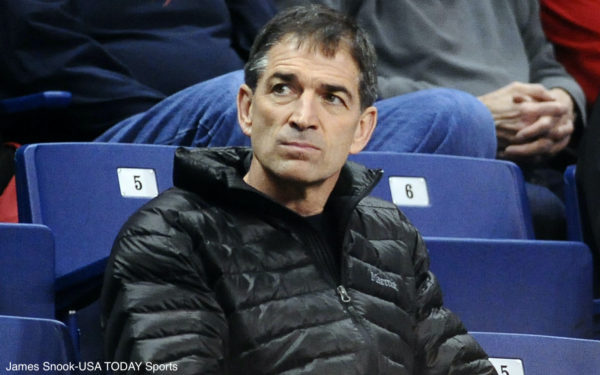 John Stockton is one of the most celebrated basketball players in Gonzaga history, but it may be a while before anyone sees the Hall of Famer in attendance to watch his alma mater play.

Stockton told Theo Lawson of The Spokesman-Review on Saturday that his season ticket package has been suspended by Gonzaga. Stockton and the university have been at odds over the the mask mandate at McCarthey Athletic Center. The 59-year-old said he had a conversation with Gonzaga athletic director Chris Standiford recently that was “not pleasant.”

“Basically, it came down to, they were asking me to wear a mask to the games and being a public figure, someone a little bit more visible, I stuck out in the crowd a little bit,” Stockton explained. “And therefore they received complaints and felt like from whatever the higher-ups — those weren’t discussed, but from whatever it was higher up — they were going to have to either ask me to wear a mask or they were going to suspend my tickets.”

Stockton chose the latter, which is not a surprise. He has been outspoken against mandates and lockdowns associated with the COVID-19 pandemic. Stockton shared some of his thoughts in a documentary last year titled “COVID and the Vaccine: Truth, Lies and Misconceptions Revealed.” He said during that interview that more than 100 professional athletes and possibly millions of other people have died as a result of being vaccinated. Those claims are not based in fact.

Stockton, the NBA’s all-time leader in steals and assists, said the disagreement over masking has strained his relationship with Gonzaga. He believes the two sides will eventually work things out, however.

“I think certainly it stresses (the relationship with Gonzaga). I’m pretty connected to the school,” he said. “I’ve been part of this campus since I was probably 5 or 6 years old. I was just born a couple blocks away and sneaking into the gym and selling programs to get into games since I was a small boy. So, it’s strained but not broken, and I’m sure we’ll get through it, but it’s not without some conflict.”

It does not sound like Stockton plans to change his mind about wearing a mask to Gonzaga games. He said his tickets will be reissued if and when the mask mandate is dropped.

Stockton played for Gonzaga from 1980-1984. He is one of only two players to have his jersey number retired by the school. Stockton was drafted by the Utah Jazz with the 16th overall pick in 1984. He spent his entire career in Utah and was named an All-Star 10 times.