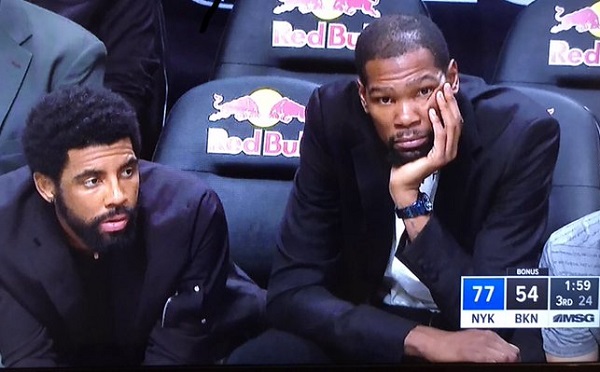 Kevin Durant and Kyrie Irving chose to sign with the Brooklyn Nets over the New York Knicks in free agency because they both felt the Brooklyn squad was up-and-coming, and the current state of the organization was much better than the Knicks. Imagine their surprise then to see their team get beat badly Thursday by the same Knicks franchise the two avoided in free agency. It was not pretty.

Take a look at their faces during the third quarter:

The Knicks ended up winning 94-82 at Barclays Center in Brooklyn.

Durant is still recovering from a torn Achilles tendon and has not played this season. Irving remains out with a shoulder injury and appears behind schedule with his rehab.

No, Jerry Jones did not take massive swipe at Dak Prescott over INT

Dallas Cowboys owner Jerry Jones made some comments on his weekly radio interview on Tuesday that have set the NFL world on fire, but they are being widely misrepresented.
In his spot on 105.3 The Fan, Jones was asked a question about the