Lawrence proposed to girlfriend Marissa Mowry on Friday night in Clemson. He got engaged on the field at Memorial Stadium, getting down on one knee to ask Mowry to marry him.

FOREVER. You’re everything I’ve dreamed of. I love you and can’t wait to marry you. #ENGAGED (Photos: @madwilliams727 )

Mowry, who plays soccer at Anderson University, says it was the “Easiest YES of my life!!!”

Lawrence will be a junior at Clemson this fall. He and Mowry have been together for over four years. His first appearance on her Instagram account was back in April 2016.

Lawrence led Clemson to the national championship as a freshman and is viewed as a top potential NFL Draft prospect. We wonder how his lookalike feels about this development. He is the son of Lamar Hunt, who was the founder of the AFL and MLS, and owner of the Kansas City Chiefs. Clark is the chairman and CEO of the Chiefs and began as the team’s chairman in 2005.

Not only does Clark run the Chiefs, but he also is surrounded by beautiful women. His wife Tavia was Miss Missouri Teen USA and Miss Kansas USA.

Clark and Tavia have three children, including daughter Gracie, who has also competed in beauty contests and represented Texas in the Miss International competition. On her Instagram profile, Hunt says she is a spokesmodel for NFL Style.

The AFC Championship trophy is named after Clark’s father. Getting to hoist that trophy for the first time in 50 years was a special and long-awaited honor for the Hunt family. Kansas City Chiefs fans are a passionate group, and Patrick Mahomes’ girlfriend is at the forefront of the fanbase representing that passion.

Mahomes’ girlfriend Brittany Matthews has been making noise on Twitter all season long and now is viewed as a symbol of the team’s loudness at games. A fan sent her a tweet on Saturday that featured a poster saying to get loud like Matthews.

My husband loves having multiple signs for the game. I told him this was the new decimal up sign. He claimed no one would get it but I said Twitter would! #getloud #KClovesbrittany @brittanylynne8 pic.twitter.com/rMjznkCdxZ

Matthews and Mahomes’ brother often are at games together and sharing videos on social media getting Chiefs fans pumped up. Last week when the Chiefs fell behind 24-0 to the Texans, Matthews was bringing the energy on social media, pumping everyone up.

All you haters and doubters CHECK THE SCORE

Matthews’ passion is no surprise. She and Patrick have been together since 10th grade and began dating at Whitehouse High School in Whitehouse. When Mahomes went to play football at Texas Tech, Matthews played soccer at University of Texas at Tyler.

Matthews went on to play soccer in Iceland after college, but she appears to have focused her career on fitness since then and has been in Kansas City with Mahomes since 2017. She travels to the team’s games too and made some noise earlier in the season after complaining about the treatment from Patriots fans in New England. When she’s at Arrowhead Stadium, she doesn’t need to worry about the opposing fans. Kate Upton and Amy Crawford teamed up to recreate a great magazine cover photo of their husbands.

Upton, the wife of Houston Astros ace Justin Verlander, posted a photo on her Instagram account Thursday ahead of the deciding Game 5 of the ALDS that showed her posing next to Crawford, who is Gerrit Cole’s wife. The two are in the same poses their husbands struck for an SI cover in September.

Take a look (you can scroll to the second photo to see the SI cover).

The photo appeared to have been taken at Tropicana Park, likely when the Astros were in St. Petersburg for their series with the Tampa Bay Rays. Cole is the Astros’ Game 5 starter.

Interestingly, Crawford is the sister of San Francisco Giants shortstop Brandon. Amy and Cole met when they were both at UCLA.

Klay Thompson took in Sunday’s Cubs-Milwaukee Brewers game at Wrigley Field in Chicago along with girlfriend Laura Harrier, and the two seemed to enjoy themselves.

The two were sitting in the front row for the game and were shown by CSN Chicago grooving to some music:

Also Confirmed: Klay Thompson likes to move it, move it.

Possibly groove it, but this is not confirmed as of now. pic.twitter.com/bsU24mrIOU

Thompson is recovering from surgery to repair a torn ACL suffered during the NBA Finals in June. He underwent the surgery in early July and says he does not want to push his return. The 29-year-old is a part of the cast of “Space Jam 2”, which has been shooting this summer. Thompson working as an actor would allow him to relate to Harrier in that regard. Harrier, 29, is known for her role in “Spider-Man: Homecoming”.

There was talk the two had taken a break in their relationship, but they are definitely together and recently enjoyed a trip to France.

Back in January, Thompson credited Harrier for inspiring his monster 44-point game. 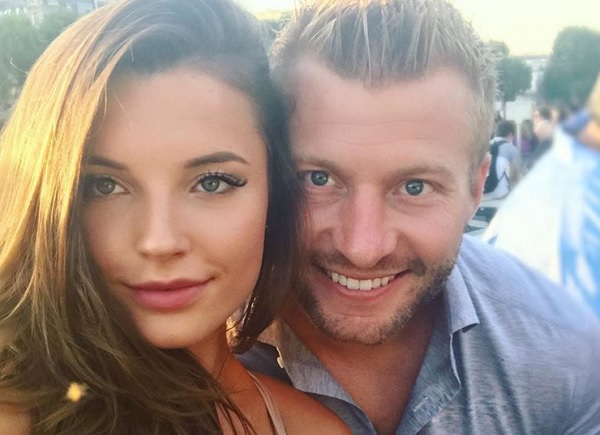 JJ Watt, Kealia Ohai get engaged while on vacation 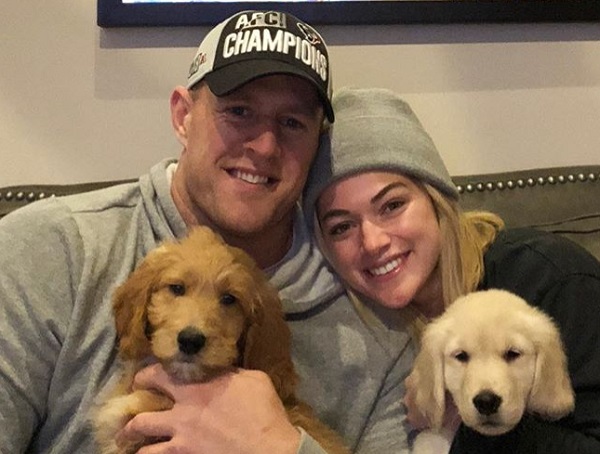 Watt proposed to girlfriend Kealie Ohai while the two were on vacation over Memorial Day weekend. He shared the news along with photos on social media.

I’m the luckiest man in the world. #SheSaidYes

Watt, 30, and Ohai have been dating since at least 2016, which is when she publicly confirmed they were a couple. Ohai, 27, plays soccer for the NWSL’s Houston Dash and is a member of the US Women’s National Team. Watt is a five-time Pro Bowler and three-time AP NFL Defensive Player of the Year.

The two combine to form an athletic power couple in Houston. Giancarlo Stanton has a girlfriend and made a public appearance with her during the week.

Stanton was rumored since last summer to be dating model Chase Carter, and now things are confirmed as official. The two showed up at TAO Downtown in New York Tuesday night for a DuJour Media event — Stanton is on the cover for April.

“My ultimate career goal is to win a championship. I’ve accomplished a lot personally and I have plenty of time to accomplish more in my personal life, I’m still young. But in my professional life I definitely want to bring my team to a championship and experience that with them. To help my team accomplish that is the ultimate goal for me,” he said in DuJour.

Stanton is in his second season with the Yankees following an offseason trade last year by the Marlins. He followed up his 2017 MVP campaign by batting .266 with an .852 OPS last season. The Yankees are hoping for bigger things from him this season.