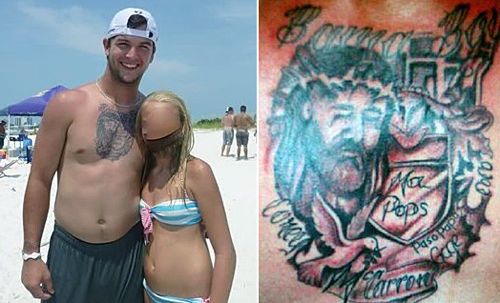 When pictures of A.J. McCarron’s chest tattoo emerged in September, they nearly brought the internet to a halt. Sports blogs where aghast with the design and location of the ink. Our own Steve DelVecchio even called it “just embarrassing.” Well now, thanks to Bamamag.com, we know every intricate detail about the tattoo:

The tattoo has “Bama Boy” written at the top along with images of Jesus, a dove representing family members who have died, Bryant-Denny Stadium and a family crest. Written inside the crest are the words “Ma” and “Pops” representing his parents. Around the outside of the tattoo are “Corey,” his brother who recently announced he would transfer from the University of South Alabama to walk-on as a tight end at UA, “Pasopapa,” Spanish for stepfather; “Gage,” and “Coco,” his stepbrother.

So there you go — the story behind the legendary tattoo. The entire article about McCarron is well worth a read. It discusses a childhood jet skiing accident that nearly left McCarron with brain and vision damage.