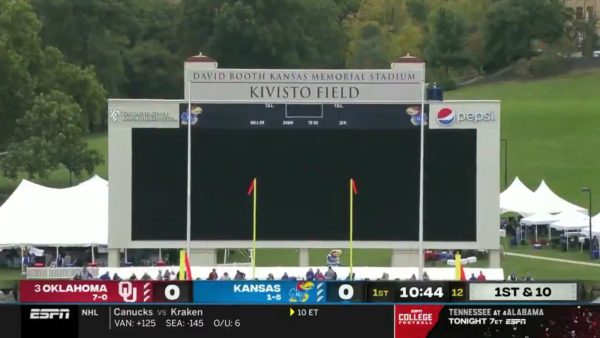 Saturday’s game between Oklahoma and Kansas was halted due to a brief power outage in Lawrence.

With just over ten minutes to go in the first quarter, Kansas Memorial Stadium lost power. All the scoreboards went down, prompting an official timeout. The succinctly stated reason was that “everything is off.”

"Timeout on the field. Everything is off" 😂😂 pic.twitter.com/z5oyUqjspS

The Oklahoman’s Ryan Aber, covering the game from the press box, said everything except the stadium lights went down.

The delay was a brief one, lasting less than ten minutes. Kansas wound up scoring a touchdown on the drive to take a 7-0 lead.

Power outages can be a fact of life during games, and are uncommon but not unprecedented. It’s kind of an awkward look for Kansas, but there were no real problems as a result, so they can more or less laugh it off.