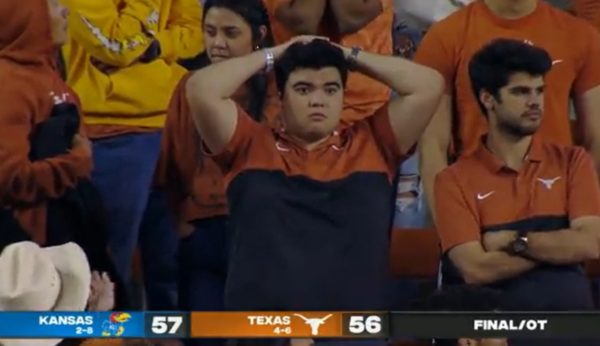 Kansas fans in attendance for Saturday night’s huge upset win in Austin had a lot of fun rubbing in the victory against Texas.

The Jayhawks football team won at Texas for the first time ever, defeating them 57-56 in overtime thanks to some bold calls from coach Lance Leipold. Jared Casey, who caught the winning 2-point conversion, had some fun doing the “Horns Down.” And KU fans brought jokes for Texas.

Kansas fans sarcastically taunted Texas with “SEC! SEC!” chants. They did it after KU had an interception late that looked like it might seal the win.

Then they did it again after Kansas pulled off the upset win. You can hear Kansas fans do it around 50 seconds into this video.

What’s the deal? Texas and Oklahoma surprised people by announcing before the season that they were leaving the Big 12 for the SEC.

The SEC is regarded as a tougher football conference. Given how mediocre Texas has been over the past decade playing in the Big 12, most expect things to get much worse for the Longhorns when they upgrade conferences.

That’s the reason for the sarcastic “SEC” chants.

Texas fans meanwhile are stunned now that they are 4-6 and have lost five in a row.