ESPN had rapper Eminem in the booth during halftime of the Michigan-Notre Dame game on Saturday night because nothing says college football tradition quite like Marshall Mathers. Actually, Eminem was on to promote his single “Berzerk” and his Marshall Mathers LP 2 album due out in November, which definitely fit in well during a game of such magnitude.

The interview was every bit as bizarre as you could imagine. First, Eminem looked faded out of his mind when the interview began. Seriously. Check out this amazing GIF for the ages:

What was Eminem’s excuse for his odd behavior?

“Live TV freaks me out a little bit,” he said.

But the gem was when Kirk Herbstreit what he was most excited about the album, and he answered “nothing” with a straight face.

Eminem finally woke up enough to tell Brent Musburger that the announcer was on his fantasy announcer team along with Pat Summerall, Al Michaels and John Madden.

Things took an extra fun turn when Musburger, being the gambling addict that he is, asked the rapper whether he liked the Detroit Lions to cover on Sunday. Eminem declined to make a pick because he didn’t want to jinx his hometown team.

ESPN execs must have just loved Eminem looking drugged out and Musburger talking point spreads all in the same interview.

Well done, that was truly incredible. And Eminem needs to be commended for his stellar acting performance. 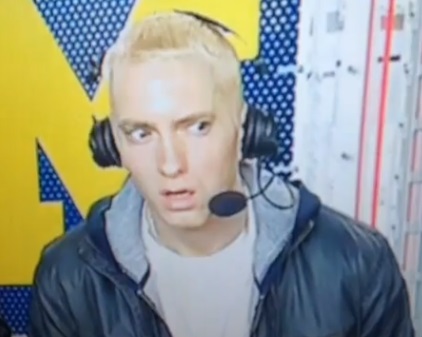