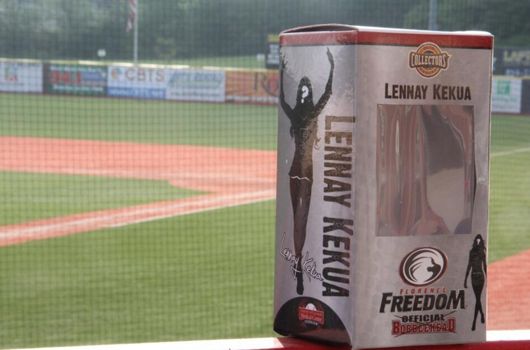 The Manti Te’o fake girlfriend story may have gotten old by now for many of us, but that hasn’t stopped people from using it to make money.  The Florence Freedom, an independent baseball team in the Frontier League, will be holding a giveaway that is not actually a giveaway on Thursday evening — it’s more like a joke.

As you can see from the photo above that Darren Rovell passed along, the Freedom are giving away Lennay Kekua bobblehead dolls to the first 1,000 fans who arrive at their ballpark on Thursday. Since Kekua didn’t actually exist, the box is empty and simply has her name on it.

Te’o has already had to hear it from airline companies, hotel chains and the San Diego media, so we might as well keep it going until we see what he can do in the NFL. The bobblehead giveaway is a pretty clever idea, but nothing is going to beat Maxim’s latest Hot 100 list that took the ultimate shot at the former Notre Dame linebacker.