I’m not sure what’s more upsetting, the lack of knowledge regarding the origin of the “Big Ball Dance,” or that the NBA actually fines people for doing it. See, the origin of the Big Ball Dance dates back to 1994 and the release of Major League II. In the movie, Pedro Cerrano has made a transition from hot-head to peaceful lover, and a slump ensues. Japanese import Isuro Kamikaze Tanaka mocks Cerrano for being a sissy, and tells him one day in the locker room that he needs to sack up. Tanaka uses a dictionary to find the Japanese translation of balls and comically ends up saying Cerrano “has no marbles.” 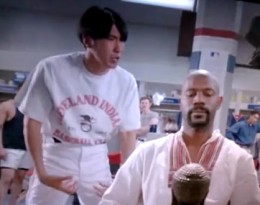 The “no marbles” chant is used to goad Cerrano the rest of the movie. Angered by the taunts, Cerrano winds up hitting monster home runs and does the “Big Ball Dance” as a way to shut Tanaka up (as you can see above). The whole marbles thing is one aspect of the movie that was memorable, and that made it funny and cute. Every time I see an NBA player use that celebration, I think back to Major League II and laugh. But apparently someone in the commissioner’s office is clueless and taking things all the wrong way.

Miami Heat guard Eddie House did the “Big Ball Dance” after hitting a game-winning three pointer Sunday against the Thunder. People called the move an “obscene gesture,” which to me is a) insulting and b) shows an apparent lack of understanding about the move. Calling that an obscene gesture is like saying someone picking their nose on camera is an “obscene gesture.” But I digress.

A topic on PTI on ESPN discussed the dance, and the question was whether the fine was reasonable, and whether House stole the move from long-time player Sam Cassell. 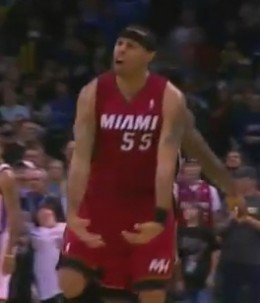 To answer the first question, heck yes the fine was ridiculous. This is a fun move, not an obscene gesture by any stretch. And two, if we’re putting copyrights on moves, then everyone got it from Major League II and Tanaka. Glad we got that all cleared up.

Basketbawful also covered this subject two years ago and made the exact same point. They even shared a great video from Major League II that should catch you up in case you never saw it. Here’s the history lesson: