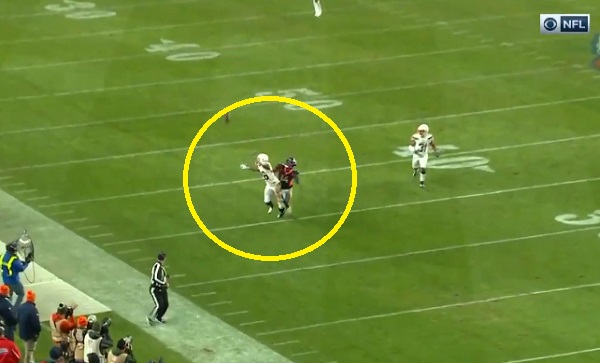 The Los Angeles Chargers lost to the Denver Broncos on Sunday in heartbreaking fashion, which is to say “in typical Chargers fashion.”

The Chargers nearly shot themselves in the foot with a pair of false starts to move back a 4th-and-1 down 20-17 with 2:22 left. They still converted the 4th-and-11 and later moved into field goal range, tying the game at 20 on a Michael Badgley field goal with 14 seconds left.

The Broncos could have taken a knee and gone to overtime, but they decided to give it a shot instead.

Drew Lock heaved a pass down the right sideline for Courtland Sutton, and pass interference was called. Because pass interference is a spot foul in the NFL, the ball was moved to the Charger 28. Brandon McManus then came in to kick a 53-yard field goal to win the game as time expired.

The way the ending unfolded is another reminder of why the NFL should change its pass interference penalty. Not only could I argue that the pass intereference call in this case was a bad one, but the real problem is that the spot foul rule can sometimes unfairly penalize teams for the infraction, such as this case.

Al Riveron explains the ruling on the field of defensive pass interference in #LACvsDEN: pic.twitter.com/IJH2X5wXNk

Moving the ball 37 yards through the air on one play is not easy, yet with one call by an official, the Broncos received such a reward that effectively ended the game.

In college football, the penalty for pass interference is 15 yards. That is much more reasonable and does not unfairly reward a team.

In the current system, an offensive team is incentivized to take a deep shot like that late because two outcomes can help them: a catch or flag. The penalty in the NFL disproportionately rewards the offense. A game should be decided by players executing plays rather than by officials making calls that swing the game in such an unfair manner.

When it comes to society, we often complain about penalties that do not fit the crime. This is most definitely not a penalty that fits the crime.