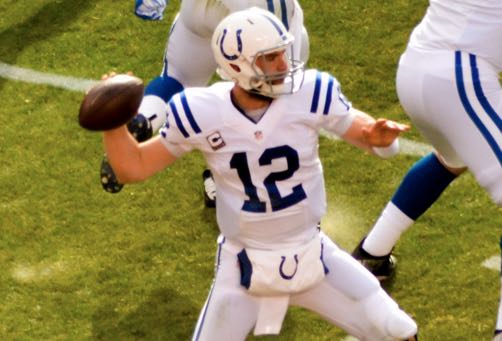 The Indianapolis Colts are planning to make a very sizable investment in Andrew Luck, and they would like the quarterback to protect that investment by doing a better job of protecting himself.

In the past, Luck has had a tendency to absorb contact rather than going to the ground. It’s an admirable trait, but it is also one that leads to seasons like last year, in which the 26-year-old appeared in just seven games. Colts owner Jim Irsay wants to see Luck adjust.

“One thing we did talk about internally was to make sure he does have the slide down,” Irsay said, per Mike Wells of ESPN.com. “If we have to bring in a baseball player or baseball coach to talk about sliding. (Seattle quarterback) Russell Wilson is a baseball player, and when he slides, he does it so naturally. Andrew’s struggled a little bit more, but I think that’s just his competitive nature saying, ‘Do I shut it down or get those 2 extra yards?’ His competitive nature just gets to him.

“But he has to stay healthy. That’s part of his legacy. You can’t be a great player in this league if you don’t stay healthy. Everyone knows that. You just can’t. I think about Bob Sanders. What a great, great player. … But those injuries and the shortness of his career, that’s a tough, tough thing.”

Luck sat out most of 2015 due to numerous injuries, the most serious of which was a lacerated kidney that he suffered on a brutal hit from Danny Trevathan (video here). Luck could have avoided that hit if he didn’t cut the ball back up field like a running back in an attempt to gain extra yardage.

“Andrew has the responsibility to make educated decisions to protect himself,” Irsay added. “He knows that, and as we go forward, we want to see him at times slide, throw it away, keep him out of harm’s way. We have to do a better job protecting him, too.”

There’s a fine line between being competitive and taking unnecessary risks, and Luck flirts with it. As we all know, he has the potential to be the game’s best quarterback when healthy. The Colts are hoping a safer approach will lead to a healthier Luck.