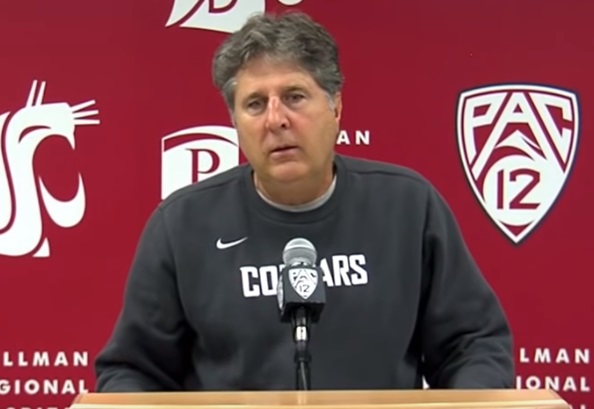 Gardner Minshew playing well as a rookie in the NFL is very much a feather in the cap of Mike Leach.

Leach has long run a highly successful passing system in college, first at Texas Tech and now at Washington State. The knock on his quarterbacks was that they were taking advantage of the system and unable to succeed in the pros. Minshew looking so good early on, especially as a sixth-round pick, reflects well upon Leach and the Air Raid system. Leach also thinks the questions NFL scouts had about Minshew before the draft were ridiculous.

In a May interview with NFL Network, Leach talked about the questions he received from scouts, which made him wonder whether they even watched the quarterback. FOX’s announcing team of Troy Aikman and Joe Buck referenced the interview during Thursday night’s Jaguars-Titans game.

”Did you really watch any film?”

“The funny thing is people would call me about him – ‘how’s his arm?’ Well his arm’s good,” Leach said.

“‘Is he accurate?’ And I’m wondering if they’re real scouts when they start asking me if he’s accurate.

“‘How strong is his arm?’ And again, it’s running through my mind, ‘did you really watch any film?’

“He’s got great pocket presence. That’s probably what he does best. He doesn’t take negative plays. But then they’d say, ‘how tall is he?’ They’re all set for that. I’d say, ‘well, he’s exactly as tall as the all-time leading passer in the history of the NFL, which is Drew Brees.’ And then there’s this long, long, long pause. Just really long, because scouts have the ability to scrutinize and perceive life at a much higher level than you or I and mere mortals can.”

Leach’s point is that the people who are the gatekeepers of which quarterbacks should play in the NFL don’t know what they’re doing. Some are focused on the wrong things, like a player’s height, and also not doing their homework and preparation before asking about a player.

We’re starting to see more and more just how much these long-held beliefs about what constitutes an NFL quarterback — they must be a minimum height and have played in a certain style of college offense — is being shattered. Shorter quarterbacks like Brees and Russell Wilson have succeeded, paving the way for Baker Mayfield and Kyler Murray. And we even have a guy some wanted to put at running back or wide receiver looking great. Maybe the way quarterbacks are evaluated by NFL teams needs to be reexamined.