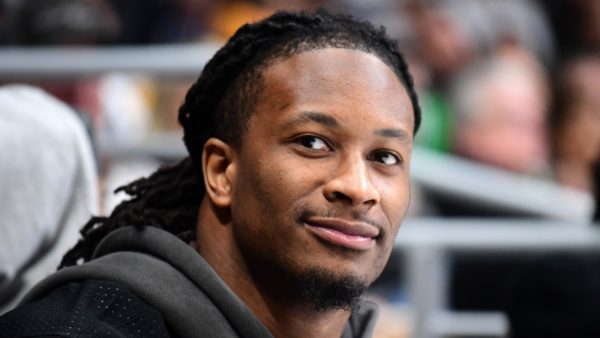 Todd Gurley doesn’t seem to be in any rush to get back on an NFL field.

The three-time Pro Bowl running back did not play at all during the 2021 season. He is now a part-owner in the Fan Controlled Football league. He spoke with NBCLX last weekend from one of his team’s games and said he had no regrets about not playing.

“There was never not one time where I watched a game and was like, ‘I wish I was out there,’” Gurley said. “I appreciated my time in the league and I’ve done things I could have never even dreamed about.”

Todd Gurley had this to say about missing the 2021 season. pic.twitter.com/m3ZZhf0YpA

Gurley didn’t rule out an eventual return to the NFL, however.

“I like doing stuff on my time,” Gurley said. “If I want to try to play again, I can try to pursue that. Or if I don’t, I can just relax and chill at the house and spend a lot more time with my family because that’s what it’s all about at the end of the day.”

Gurley was a first-round draft pick by the then-St. Louis Rams in 2015. In five seasons with the Rams, he rushed for 5,404 yards and 58 touchdowns in 73 games. In 2017, the two-time first-team All-Pro finished second in league MVP voting and won the AP Offensive Player of the Year Award.

Though he started his career strong, Gurley’s knee issues caught up to him and led to his release by the Rams following the 2019 season. The 27-year-old landed with the Atlanta Falcons for 2020. In one season with the team, he ran for 678 yards and nine touchdowns in 15 games.

While Gurley is still young, playing in the NFL requires a full-time commitment and a genuine passion for football, as well as good health. If watching his former Rams teammates win the Super Bowl in February didn’t make him miss the game at all, perhaps nothing will.