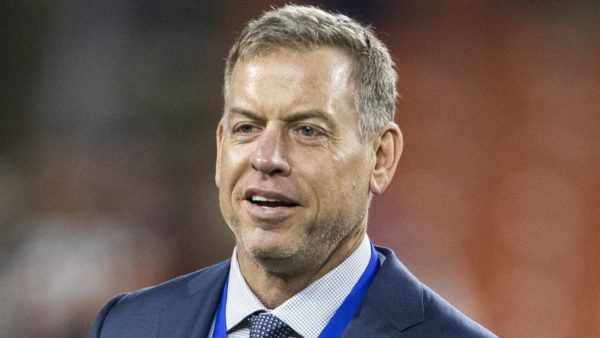 Tom Brady may soon be taking over the role Troy Aikman held at FOX. Aikman thinks that whenever Brady starts his broadcasting career, the Tampa Bay Buccaneers quarterback will be successful.

Aikman and his on-air partner Joe Buck talked with the media on Monday about their move to ESPN from FOX, where they had been a team since 2002. FOX also recently announced that Brady will work for them as a broadcaster whenever the quarterback is done playing.

Aikman was asked how he thinks Brady will do as in-game analyst and shared his thoughts.

“As far as Tom, it’s not something I thought he’d be doing, but I think he’ll be great,” Aikman said, via the New York Post. “I have a great relationship with Tom, and love when we call his games. I’ve had a chance to get to know him more since he went to Tampa in the NFC. I think he’ll be fantastic and it was an outstanding hire.”

Aikman cited Brady’s work ethic as the biggest reason he thinks the Bucs quarterback will succeed as a broadcaster.

“He’s won at everything he’s done in life and there’s no reason he won’t at this as well. The reason why I think he’s going to be good is he’s gonna work. The reason he’s played as long as he had, and has won seven Super Bowls, is he doesn’t take any shortcuts. And he’s not going to in broadcasting.”

That opinion regarding Brady seems to be fairly consistent. Most people feel that Brady’s work ethic won’t let hiim be anything less than excellent as a broadcaster.

We know Brady has the insight and knowledge to impart, but will he have the timing and personality that connects with viewers? That’s another question, and something we won’t know until he starts doing it.