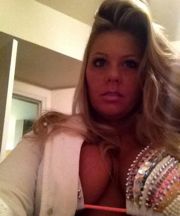 By its most basic definition, alimony is a provision that a husband or wife has to pay to his or her spouse after divorce. Alimony payments are typically designed to allow a person to continue living after marriage the way they were during marriage without having the rug swept out from under them, so to speak. Now, let’s get to Terrell Owens and his estranged wife Rachel Snider.

As many of you know, Owens and Snider — a postal worker from Texas — got married in a private courthouse ceremony back in January and managed to keep most of the details of their relationship a secret. Several days later, Snider accused TO of only marrying her so he could obtain a $2 million loan for a home. The two are currently in the process of getting divorced.

On Friday, TMZ reported that Snider is going after alimony. She wants Owens to pay all of her legal fees in addition to providing her with alimony payments. Snider also reportedly plans to refute TO’s claim that the former couple has no community property.

In other words, Snider believes she deserves financial compensation for her 72-hour failed marriage with the former NFL star. I’m not sure how her life could have changed during that short span to the point where she would now need Owens’ money to support her lifestyle (especially since she claims he married HER for money), but such is life in the United State of America.

Owens has already had enough problems with child support payments. He has no children with Snider and they weren’t even married for a week. Don’t be surprised if a court rules in his favor.