Mikaela Shiffrin competed in the women’s slalom at the Winter Olympics on Friday, and she may have been fighting some nerves before her first run.

NBC reported that right before Shiffrin went down for her first run, the skier vomited. Shiffrin completed her first run in a time of 49.37, which was 48 seconds behind the leader at the time.

After her run, Shiffrin was asked about vomiting before the race and whether she couldn’t contain her nerves.

“I don’t know. That was kind of sudden — it almost felt like a virus, less about nerves,” Shiffrin said.

NBC later reported that the skier’s trainer said there were no signs of Shiffrin being ill.

Shiffrin planned to nap before her second run in the event. She is competing a day after winning gold in the giant slalom. 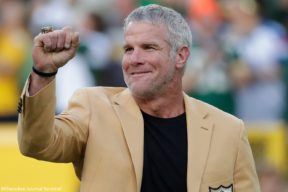 The Los Angeles Rams made an effort to prevent San Francisco 49ers fans from taking over SoFi Stadium for the NFC Championship. That effort does not appear to have worked.
Citing projections from ticket resale site Vivid Seats, Dylan Herna

Tom Brady admitted last week that officials have let him get away with taunting and unsportsmanlike conduct penalties, but the star quarterback does not think he deserved the first one that was ever called against him.
Brady was hit with a