Notre Dame DB Drue Tranquill appeared to injure himself seriously after celebrating a third down stop towards the end of the second quarter against Georgia Tech Saturday.

Tranquill was celebrating a pass breakup and leaped to bump a teammate, and he went down. Tranquill was grabbing his knee like he injured it really badly:

Tranquill would join Malik Henry as another key Irish player to suffer a major knee injury this season if that indeed is his diagnosis. And he would join a long list of players who got hurt while celebrating on the field. Georgia State punched its ticket to the NCAA Tournament with a win over Georgia Southern in the Sun Belt Championship on Sunday, but the team may be taking instruction from a coach on crutches during the Big Dance.

Georgia State coach Ron Hunter was celebrating his team’s 38-36 win (yeah, you read that right) when he appeared to suffer a knee injury. He was helped off the floor by two Panthers staffers.

As it turns out, Hunter tore his achilles while embracing his son, Georgia State star RJ Hunter.

.@GSUPanthers coach Ron Hunter tore his achilles in the celebratory scrum after the game

We have shown you plenty of unfortunate celebration injuries over the years here at LBS, but this has to be one of the worst. Hunter is likely going to be in a lot of pain while trying to prepare his team for the NCAA Tourney. 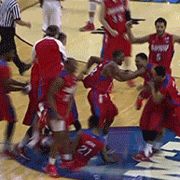