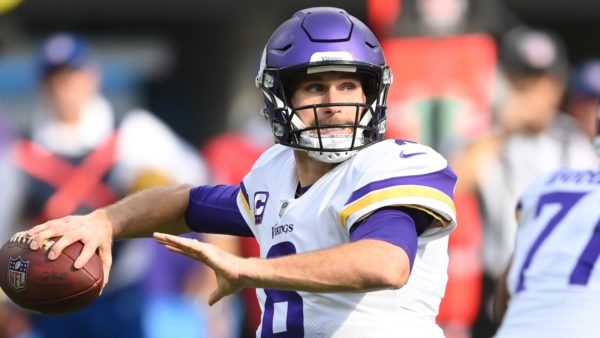 Kirk Cousins helped his Minnesota Vikings improve to 12-3 with a 27-24 win over the New York Giants on Sunday, and the quarterback was full of praise for his teammates.

Cousins went 34/48 for 299 yards and 3 touchdowns in the big victory. A couple of his offensive weapons put up huge receiving games.

Cousins was asked in his postgame interview with FOX’s Kristina Pink about all of his great weapons. The Vikings quarterback was grateful and also praised his team’s front office for trading for Hockenson.

“It’s a blessing. Trading for T.J. was such a great acquisition once we lost Irv (Smith). … It’s a coach’s and a quarterback’s dream to have those kind of players,” Cousins said.

The Vikings acquired Hockenson in a trade with the Detroit Lions on November 1st, the day of the trade deadline. They made the move after learning that Smith had suffered a high ankle sprain.

Thanks to his two-touchdown game, Hockenson now has three touchdown catches since joining the Vikings.

TJ Hockenson has harsh quote about Lions after trade T.J. Hockenson does not seem unhappy to be leaving the Detroit Lions behind to join the Minnesota Vikings.

The Lions traded Hockenson to the Vikings on Tuesday for draft picks, moving on from the former top ten pick. On Wednesday, Hockenson spoke to the Minnesota media and made a fairly pointed comment about what he was leaving behind in Detroit.

T.J. Hockenson on going from Lions to Vikings: "That’s really what we’re here to do is go somewhere and win some games. That’s kind of the first time I’ve been able to say that."

“That’s really what we’re here to do is go somewhere and win some games. That’s kind of the first time I’ve been able to say that,” Hockenson said.

As harsh as the line is, few Lions fans would disagree with the sentiment. Since Hockenson entered the league in 2019, the team has gone just 12-32-2, including a 1-6 start in 2022. The tight end cannot really be blamed for that, and he was the team’s leading receiver so far in 2022 with 395 receiving yards and three touchdowns.

The Vikings are 6-1 and in first place in the NFC North. Hockenson looks to have gone from one of the league’s worst franchises to a playoff team, so you can hardly blame him for being pleased. Minnesota Vikings tight end Irv Smith Jr is expected to miss an extended period after he suffered an ankle injury on Sunday, but the team has found a great replacement for him.

The Vikings have acquired tight end TJ Hockenson in a trade with the NFC North rival Detroit Lions, according to multiple reports. ESPN’s Adam Schefter had the full terms of the deal:

Schefter also reported that Smith will be sidelined for 8-10 weeks, which is likely why the Vikings made the trade.

Hockenson, the No. 9 overall pick in the 2019 NFL Draft, has played a key role in Detroit’s offense since he entered the league. He has 26 catches for 395 yards and three touchdowns this season. The former Iowa star had 61 catches last year and a career-high 67 on a whopping 101 targets in 2020.

ESPN Stats & Info noted that Vikings quarterback Kirk Cousins has not been very effective while targeting tight ends this season. The team is likely hoping Hockenson can help with that. It is also interesting to point out that it has been nearly 25 years since the Lions last made a trade within their own division.

The Lions had not made an intradivision trade involving a player since 1998, when they traded RB Glyn Milburn to the Packers for a draft pick.

As for the Vikings, Kirk Cousins is 30th in QBR and 33rd in Yards Per Attempt when targeting TE this season (out of 33 qualified QBs). https://t.co/biT08aQWqa pic.twitter.com/H06W73uPop

The Lions fell to 1-6 with their loss to the Miami Dolphins on Sunday. They are, once again, quickly fading from playoff contention. Minnesota improved to 6-1 with a win over the Arizona Cardinals.

The Detroit Lions are in the middle of a full-scale retooling, but at least one of their current players appears to be firmly in their future plans.

ESPN’s Jeremy Fowler noted in a recent column that the Lions are expected to prioritize contract talks with tight end TJ Hockenson at some point this summer. Hockenson, the team’s first-round pick in 2019, has two years remaining on his rookie contract, as the team picked up his fifth-year option for 2023 earlier in the offseason.

Hockenson is a no-brainer extension candidate. The 25-year-old has 12 touchdown receptions in his first three NFL seasons and is already being recognized as a solid tight end who can block and catch. While not necessarily a superstar, Hockenson is clearly a core player with room to grow.

The Lions have been praised for their recent drafts, and have certainly added some attitude to the organization in recent years. If they have a bright future, Hockenson looks poised to be a part of it.

It would be very difficult to find a former teammate who would say a negative word about Matthew Stafford, and Detroit Lions tight end T.J. Hockensen put that into perspective when asked about the quarterback this week.

Hockensen had nothing but positive things to say about Stafford during an appearance on the “Bussin’ With the Boys” podcast. He described Stafford as a player who would do anything for his teammates and said he was beloved in the locker room.

“He’s one of those guys, again, for the boys, for all of us, he was like, ‘y’all do all this during the week. Y’all do everything I ask of you, and I’m going to go out there and do everything I can for you guys,’” Hockensen said, as transcribed by Benjamin Raven of NJ.com. “Everybody on our team respected that guy. Like everybody loved him. He will forever put a stamp on my career and in the city of Detroit. He’s, I mean, he was, like I said, one of the best — the best player I’ve ever (played with).”

Stafford, of course, was traded to the Los Angeles Rams in exchange for Jared Goff and draft picks. Even with the Rams and Lions both playing in the NFC, Hockensen said he and everyone else in Detroit want to see Stafford win a Super Bowl.

“There’s not a guy in our locker room that’s not rooting for that guy to get a ring,” Hockensen said. “I mean, all of us loved him.”

If you want to know why Stafford has earned so much respect from his teammates, look no further than his explanation for playing through injuries.

The Lions have been one of the worst franchises in football for years, so it’s fair to wonder how Stafford would have fared elsewhere. He now has a chance to answer those questions. It’s no surprise his former teammates want to see him succeed.

The 2019 NFL Draft is approaching, which means all of the speculation, rumors and insider reports will come to an end and we’ll finally see exactly what each of the 32 general managers are thinking.

As part of that, we’ll likely see a flurry of trades, with many of those coming at the top of Round 1. But the jockeying won’t end there as teams contentiously wheel-and-deal in an effort to fortify their rosters. What players will they be trying to trade up for? We have an idea.

Here’s a look at 10 prospects who are most likely to be targeted in trade-up scenarios.

The overall feeling on Metcalf is mixed at best. Some have him projected to go in the top 10, others in the top 20, and more yet in the second round. It’s anyone’s guess where he eventually goes, but in the event Metcalf falls into the No. 20 range, someone is going to take a flier and not risk waiting for him to fall further. The Baltimore Ravens, New England Patriots, Arizona Cardinals and Green Bay Packers are all potential buyers in such a scenario, so keep an eye out for some late-Round 1 shakeups if Metcalf remains available at that point.

END_OF_DOCUMENT_TOKEN_TO_BE_REPLACED 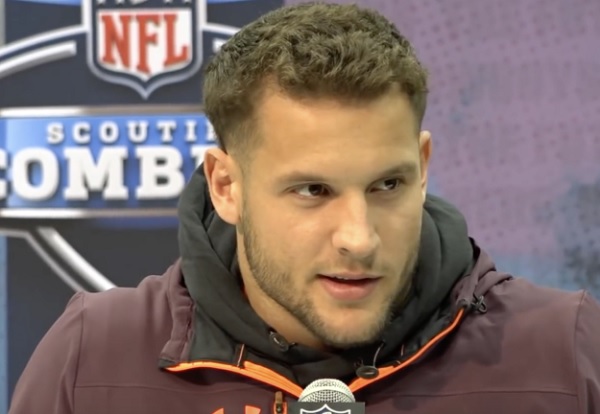