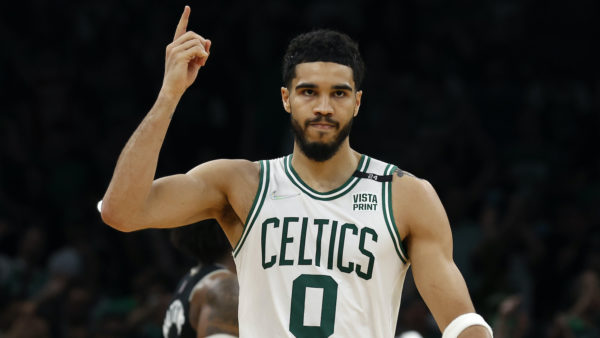 ABC had either awful or impeccable timing (depending on your perspective) after the Golden State Warriors won the NBA championship.

The Warriors topped the Boston Celtics in Game 6 of the Finals on Thursday to clinch their fourth title since 2015. Afterwards, ABC aired an unfortunate first commercial in between the final buzzer sounding and the trophy presentation — the Ruffles ad of Celtics star Jayson Tatum.

Not @RUFFLES and Jayson Tatum in the very first commercial after the Warriors win the #NBAFinals pic.twitter.com/5VMHnH4XmU

Social media users were beside themselves over the ridiculous timing. Here were some of the funniest tweets about the ad placement.

laughed out loud when that Jayson Tatum Ruffles commercial came on in between the Warriors celebrating, spectacularly bad timing

The first commercial to run after the buzzer was a Jayson Tatum Ruffles commercial pic.twitter.com/30fUzHKwxS

Ruffles was like “we gettin this Tatum commercial off”

Not the greatest timing for the Jayson Tatum Ruffles commercial. He played like he had severe heartburn tonight.

maybe not a great spot for that Tatum ruffles commercial

To make matters even worse, Tatum stank to high heaven on Thursday. In the biggest game of his life, Tatum was bottled up for 13 points on 6-for-18 shooting. He also missed three of his four three-point tries, failed to get to the free-throw line even once, and had five turnovers (tied for a team high).

Tatum is still just 24 years old, so he can take this year’s Finals failure as a learning experience for the future. But the timing of that Ruffles ad was just one in a series of troll jobs that the Celtics faced after losing on Thursday.