Nick Saban and Jimbo Fisher have controlled the college football headlines over the past week after Saban accused Texas A&M of buying many of their new top recruits.

Fisher called Saban a narcissist in his response and said that he wants nothing to do with the Alabama coach moving forward.

On Friday, another big-time coach gave his opinion on the feud.

“I don’t know why (Fisher) is mad at Saban,” Spurrier said. “Did Saban say something that wasn’t true?

“I don’t think Saban told any lies in there, so I don’t know what he was mad about. Since (Fisher) beat him last year, I guess he can talk now.”

Based on his comments, it looks like Spurrier is siding with Saban in this case. The two coaches do have a relationship. In early May, Spurrier received the inaugural Nick Saban Legacy Award, which was created to honor coaches who had a long-lasting impact on the game.

Luckily for college football fans, Saban and Fisher will get to settle the score on October 8 when the two teams play in Tuscaloosa.

SEC commissioner Greg Sankey is not pleased with the war of words that was ignited this week between Nick Saban and Jimbo Fisher, and he does not want Lane Kiffin calling more attention to the feud.

Kiffin is a regular guest on “The Dan Patrick Show,” and he was supposed to appear on the show on Friday. According to Patrick and company, Sankey did not allow it.

“Lane Kiffin was going to come on, but the commissioner of the SEC asked him not to comment on the Nick Saban, Jimbo Fisher situation,” Patrick said, via Erik Hall of the Mississippi Clarion Ledger.

Paul Pabst, the executive producer of the show, later noted that Sankey did not want any SEC coaches speaking with the media on Friday. The decision came after Sankey released a statement expressing his disappointment in the public spat between Saban and Fisher.

“The membership of the Southeastern Conference has established expectations for conduct and sportsmanship that were not met (Wednesday night or Thursday),” Sankey said. “A hallmark of the SEC is intense competition within an environment of collaboration. Public criticism of any kind does not resolve issues and creates a distraction from seeking solutions for the issues facing college athletics today.

“There is tremendous frustration concerning the absence of consistent rules from state to state related to name, image and likeness. We need to work together to find solutions and that will be our focus at the upcoming SEC Spring Meetings.”

What Sankey is not going to admit is how good the Saban-Fisher feud will be for ratings. The Oct. 8 game between Texas A&M and Alabama has suddenly become the biggest one on the college football schedule. That, obviously, is good for business.

Saban expressed concern over the NCAA’s new Name, Image and Likeness rules at an event on Wednesday night. He said some schools have been abusing the rules by paying recruits, and he singled out Texas A&M. Fisher was irate and absolutely unloaded on Saban the following day.

Spencer Rattler reveals which NFL offense he is studying closely 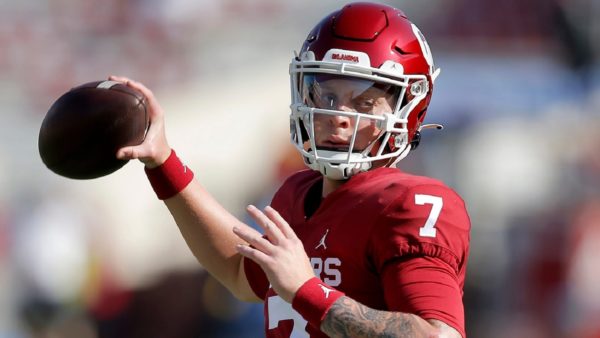 Spencer Rattler is looking to re-establish himself as a top NFL prospect after transferring to South Carolina. To do that, he’s watching one NFL offense quite closely.

Rattler said in a recent interview that he has been watching a lot of video of the Los Angeles Rams. According to Rattler, South Carolina’s offense is built on many of the same principles the Rams use.

“It’s really like the same offense as the Rams,” Rattler told Brandon Marcello of 247 Sports. “That’s a lot of the tape we watch. What they’re doing, we’re doing. You definitely have your shots down the field but it’s just a good offense. It’s a balanced offense. We do a lot of good things, so I’m excited to fully learn all of it. I’ve learned dang near all of it already, but we got a lot more install to go throughout the summer, so I’m just gonna soak it all in and prepare the best as I can.”

Most quarterbacks would do well to study the Rams’ high-powered offense. Coach Sean McVay is highly regarded for a reason, though things can be quite complex at times. Rattler embracing that is a good sign for his future, though.

Rattler is coming off a difficult career at Oklahoma and his reputation has definitely taken a hit. He still has some big believers out there, and he seems confident about his new situation.