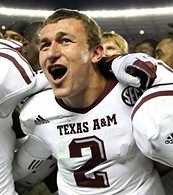 Johnny Manziel was the best quarterback in college football and the best player in the nation last year at Texas A&M, or so his Heisman Trophy says. Manziel became the first freshman ever to take home to coveted Heisman, which has everyone excited about what the future could hold for Johnny Football. According to one NFL.com scout, it may not be much when it comes time for him to play professionally.

Before you freak out about the phenomenal season Manziel had in 2012 and how he is only 20 years old, give Bucky Brooks’ full assessment a chance. Brooks believes Manziel currently projects to be a “marginal pro.” How is that possible for someone who did what he did for the Aggies last season? It has a lot to do with the difference between college football and the NFL.

Brooks, who mentioned multiple times how Manziel is one of the most electric players he has ever seen, focused on four areas — athleticism, arm talent, pocket presence and clutch factor. He cited Manziel’s ability to improvise and scramble as reasons he presents a nightmare scenario for opposing defensive coordinators, but a lot of that stuff may not work at the NFL level.

Manziel is an exceptional athlete, which we can see based on his running ability, but he makes a ton of plays outside the pocket. When teams force Manziel to remain inside the pocket, he is less effective. In losses to Florida and LSU last season, Manziel was forced to throw more and run less. The fact that he is more effective outside the pocket will be a concern for NFL teams, considering how much bigger and faster defensive lineman and linebackers are at the next level.

Again, Manziel is an incredible playmaker. He could easily build his arm strength and become a better pocket passer over the next two or three seasons, which would send his draft stock higher than it already is. That being said, we have seen plenty of quarterbacks dominate the college game and not be able to get it done at the pro level. Time will tell if Manziel will be another one of those guys.

And no, this has nothing to do with controversial pictures like this.