Floyd Mayweather should have worn high heels to the ESPYS 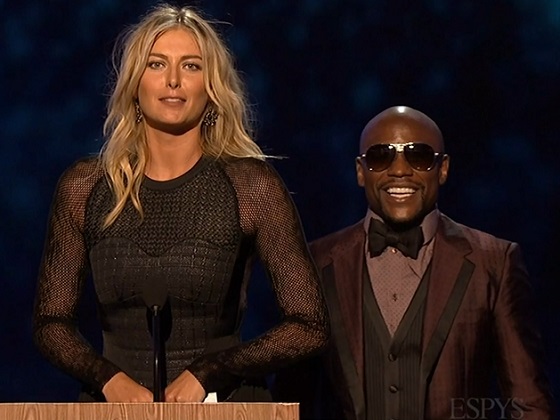 The ESPYS gave us one of the better pairings in history when they had Maria Sharapova team with Floyd Mayweather Jr. to present an award on Wednesday. And if there’s anything in the world that could bruise Floyd’s ego, it might be Maria’s height.

Floyd is 5-foot-8 and about 150 pounds. Sharapova is 6-foot-2 and about 130 pounds. Floyd’s a little guy. Maria is a huge woman. Stick Maria in some heels, and all of a sudden she’s looking like an NBA small forward.

The two actually played well off each other; Floyd got an elaborate “The Money Team” introduction skit from Drake. In response, Sharapova intentionally dwarfed him on stage to remind him who’s bigger. Floyd surprisingly was cool with the whole thing. Maybe that’s because he carries around a copy of his bank account balance and looks at it any time he’s feeling down.

At least the two gave us their best “Step Brothers” portrait: The last time I saw a pairing this funny on the TV screen was when Arnold and Danny DeVito teamed up in “Junior.” If they ever tried to kiss, do you think Floyd would have to stand on a step stool? I mean, that’s what these two had to do when they kissed.