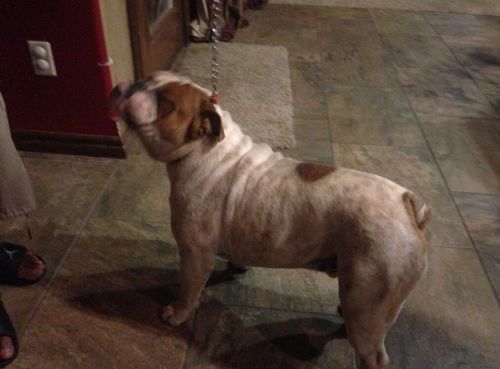 Kendrick Perkins recently said goodbye to a member of his family, and he used the power of socially media to find him a new home. Earlier this week, the Oklahoma City Thunder center posted several pictures of his dog on Twitter and asked his followers if anyone would like to purchase the English bulldog for $1,500 or best offer.

Hey I have a English bulldog and he to big to be around my youngest child he 10 months got his papers and he got a micro chip.

We paid about 3,000 for him but its not the the money we want to sell him for 1,500 but we will work with you just want a good home for him

I will work with the family who wants him 1,500 is the asking price but we can negotiate the price. Just want him to have a good family

Since Perkins is an NBA player, it would stand to reason that he does not have much time to take care of a dog and young children. He probably should have thought about that before buying the dog, but that’s all hindsight. Here’s another fantastic photo of the beautiful creature: At one point, Perkins seemed like he was beginning to panic but eventually found a buyer.

Many of you are probably wondering why Perkins wouldn’t just give the dog away to a loving family since he makes nearly $10 million per year, but finding someone who can afford to pay for it probably wasn’t a bad idea. If you can pay $1,500 for a dog, it’s a better indication that you have the resources needed to care for it. Hopefully Perkins picked a loving family and didn’t just unload him to the highest bidder.