NFL Network had an excellent commercial that aired during the fourth quarter of the Super Bowl that sparked the question: who is Leon Sandcastle?

Sandcastle was the fictional alter-ego created by NFL Network analyst Deion Sanders, who shows up at the 2013 NFL Combine to prove that stars like RG3, Russell Wilson, and Andrew Luck are not the most dominant rookies ever.

During the commercial, Sanders wears a wig and signs up for the combine under the name “Leon Sandcastle.” He runs a 4.2 40-yard dash, and gets hyped up by NFL Network analysts Mike Mayock and Kurt Warner. Eventually, the Kansas City Chiefs supposedly select Sandcastle No. 1 overall.

The commercial led to some solid jokes:

Archie Sandcastle has made it known his son will not play for the joke of a franchise that is the Chiefs.

If Al Davis were still alive, Leon Sandcastle goes in the first round.

NFL Network was well prepared for the interest its commercial would create in the “Leon Sandcastle” character. It created a website, Twitter, and Instagram account for the fictional player. They even shared this photo of Sancastle with commissioner Roger Goodell at the draft: 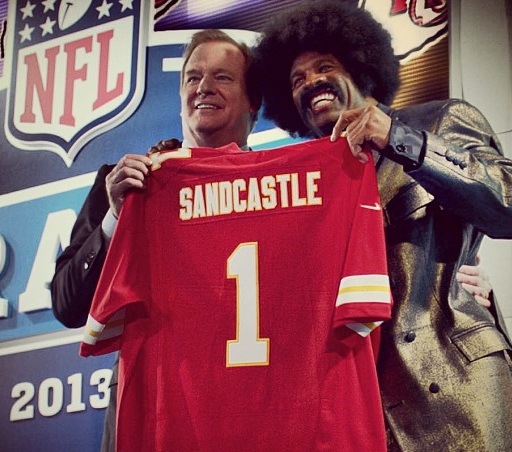