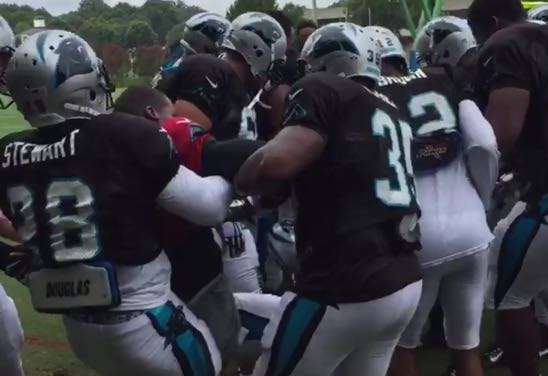 Another day, another fight between two teammates during NFL training camp.

On Monday morning, things got heated after Carolina Panthers cornerback Josh Norman intercepted a Cam Newton pass. Newton, who was wearing the standard red non-contact jersey that quarterbacks wear, ended up at the bottom of a pile with his offensive teammates dragging him out.

David Newton of ESPN observed that Newton and Norman had been building toward a confrontation.

Cam Newton and Josh Norman have been building to an encounter. Newton referred to Norman as "piss ant" during scuffle. #Panthers

Thomas Davis tells Cam Newton "that's stupid" after he gets into scuffle with Josh Norman after Norman pick. #Panthers

The Panthers signed Newton to a $103.5 million extension this offseason, so I doubt they want to see him at the bottom of practice piles going at it with teammates. The last thing the team needs is someone stepping on Newton’s problematic ankle or causing some sort of other injury.

That said, we have already seen a few fights break out around the league this summer. That’s what happens when it’s 90 degrees outside and the NFL season is right around the corner.