Rex Ryan on being voted most overrated coach: I finally beat Bill Belichick 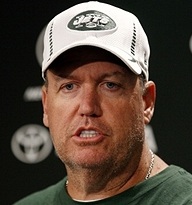 New York Jets head coach Rex Ryan is not all that upset about recently being voted the most overrated coach in the NFL. Instead, the Jolly Green Giant has found a way to put a positive spin on the whole thing. If nothing else, Rex can now say he beat Bill Belichick at something.

“My first thought was I looked and saw who was second,” Ryan said on Wednesday according to the NY Daily News. “Hey, I finally beat Belichick. I got him. I knew it would take time, but I finally got him.”

Of course, that was just Rex’s tremendous sense of humor talking. Given some of the comments he has made in the past, I doubt being named the most overrated coach in the league is something that shocked the Jets coach. It may not bother him, but it doesn’t sound like Ryan agrees with it either.

“Like it hasn’t been a tough enough year,” Rex said. “Nah, I wasn’t offended by it. At the end of the year, we’ll see who’s overrated.

Rex can say being voted the most overrated coach doesn’t offend him, but if that were totally true I don’t think there would be any need for the self-promotion. If the Jets miss the playoffs again this season, Ryan won’t have much of an argument.