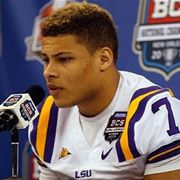 There was once a time when Tyrann Mathieu was considered the best cornerback in the nation and a lock to be selected in the first two rounds of the NFL Draft. Mathieu has always lacked size, but his ball skills and athletic ability made him the best defensive back in the country at LSU. Then, he decided he couldn’t lay off the wacky tabacky.

Once that happened, the Honey Badger’s draft stock plummeted. NFL Network analyst Mike Mayock apparently bet some NFL coach that Mathieu would not be selected in the first 50 picks of the draft, and he was right. The former Tiger was taken at No. 69, but he still hasn’t forgotten what Mayock said about him.

Mathieu is likely motivated even more by the fact that Mayock’s analysis wasn’t based on failed drug tests. Mayock gave him a fourth or fifth round grade because he thinks he will be nothing more than a nickel corner and a kick returner in the NFL.

Motivation is a good thing. Mathieu insists he has been staying on the right track, and Mayock could provide him with another reason to keep it that way. If he ends up as an effective corner in the NFL, he might owe the analyst a thank you.