Detroit Pistons center Isaiah Stewart returned from his two-game suspension on Friday after his confrontation with LeBron James. That also gave Stewart the opportunity to discuss the wild scene for the first time.

Stewart was struck in the mouth by James while the two were competing for a rebound during Sunday night’s game in Detroit. Stewart was left bleeding, and was so furious that he had to be held back from taking on James and virtually all of the Lakers (video here).

Stewart didn’t actually have much to say about the incident with James on Friday. The second-year center said it would be the last time he addressed it, added that he felt James’ shot was intentional, and said he would not let the incident define him.

Stewart on the LeBron incident: "This is going to be my last time addressing it. I watched the film. I didn't feel like it was an accident. My focus is on my team and playing basketball. I won't let that define who I am. What Detroit drafted me for is what will define who I am."

For what it’s worth, James apparently wanted to apologize to Stewart after the game. It doesn’t sound like Stewart is all that eager to hear it.

Stewart seems to be developing a bit of a reputation in some circles. That will fade in time as long as he lets his play do the talking and doesn’t wind up involved in more altercations like this. Video: Pacers announcer was not happy with LeBron James’ celebration Indiana Pacers announcer Quinn Buckner was not happy with LeBron James over a celebration the Los Angeles Lakers star did on Wednesday.

James scored 39 points in his Lakers’ 124-116 overtime win over the Pacers. James made five three-pointers in the game, including some big ones late. After sinking a three to make it a 110-104 game late in the fourth, James broke out the “Big Balls Dance” for a celebration.

Buckner did not appreciate James’ gesture.

Man’s was big mad at Lebron after this 3 pointer.. lol smh pic.twitter.com/I59xT00Fcp

“He needs to get a warning about that behavior, I’m sorry,” Buckner said of LeBron. “There’s only so much craziness you can take.”

The NBA has made clear that they do not want players doing the “Big Balls Dance.” One player recently was fined for doing it.

Will the league penalize James as Buckner suggests? That remains to be seen.

LeBron James claimed a “W” on Wednesday and may be claiming a fine on Thursday.

James returned from the 1-game suspension he served on Tuesday to play 43 minutes in his Los Angeles Lakers’ 124-116 overtime win over the Indiana Pacers. James shot 5/12 on threes and came up with some big shots for his squad during his 39-point game.

After putting his team up 110-104 with a huge 3-pointer late in the fourth quarter, LeBron did the “Big Balls Dance” to celebrate. You can see him do it around 20 seconds into the video.

Bron's celebration after this three 😅 pic.twitter.com/I90ir2r1Um

The dance is more clear in this video:

James also busted out the “silencer” celebration after a 3-pointer in overtime.

LEBRON HITS THE THREE AND THE SILENCER 😱👑 pic.twitter.com/mNp0Uzd6jD

James was definitely feeling it on Wednesday night. But the league might not be too happy. They have a firm anti-Big Balls Dance policy and are likely to fine him $25,000 for doing it.

LeBron James was suspended one game for smacking Isaiah Stewart in the face during Sunday night’s Los Angeles Lakers-Detroit Pistons game. His hard shot at Stewart caused his opponent to bleed and then go crazy on the Lakers. Both players were ejected for their actions.

Most people who watched the incident knew right away that James would be suspended for his harsh and unnecessary blow to Stewart’s face. One person who felt otherwise was Anthony Davis.

The Lakers big man said on Tuesday that he was surprised James got suspended. Davis didn’t view James’ actions as anything unusual.

“The report came out and said his hit to the face caused the incident, which is weird because he can’t control how a guy is going to react. Guys get hit in the face all the time.”

“The report came out and said his hit to the face caused the incident, which is weird because he can’t control how a guy is going to react. Guys get hit in the face all the time,” Davis said.

If Davis thinks that James’ smack to the face of Stewart was nothing out of the ordinary, he should watch the replay. James took a vicious shot at Stewart that the league called “reckless.” Stewart also wouldn’t have reacted the way he did if the shot from James weren’t significant. 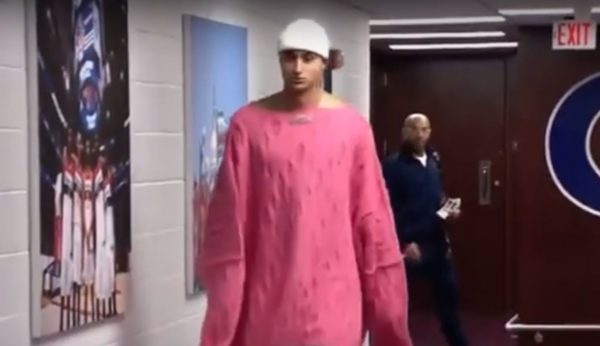 Carmelo Anthony has been involved in plenty of dust-ups during his career (see: 2006 Nuggets-Knicks brawl). Thus, what he saw on Sunday against Detroit did not faze him much at all.

A new angle of Anthony after LeBron James’ incident with Pistons center Isaiah Stewart is going viral this week. In the video, which shot from behind the Los Angeles Lakers bench and posted by Instagram user Timmy Allos, Anthony is talking about Stewart to referee Phenizee Ransom.

“He’s not coming this way,” Anthony says of Stewart, an apparent reference to Stewart supposedly going into the tunnel to get back at James.

Anthony then starts yelling at Pistons guard Cory Joseph, who had made his way to the Lakers bench. “Why are you over here?” Anthony angrily asks.

The video of Anthony went viral and led to some more great reactions.

"Hey, LAPD this is Carmelo Anthony, Cory Joseph tryna beat me up" https://t.co/gYLyrMS01C

Melo was about to give Corey Joseph the Jared Jeffries treatment lol https://t.co/CTnK3mFpT3

The 37-year-old Anthony sure did seem like he was a lot more willing to throw down than his Banana Boat bro James was. If there’s one thing that we’ve learned over the years, it’s that you definitely want Anthony on your side when the stuff hits the fan.