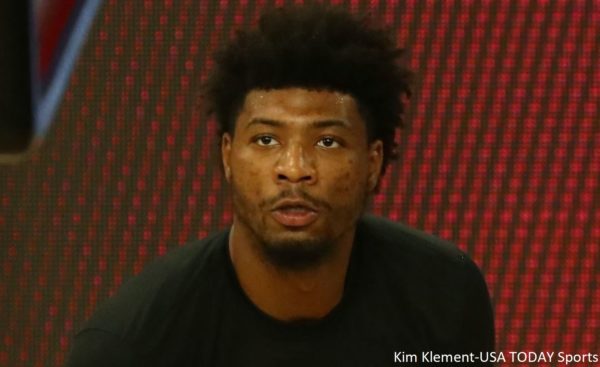 The Boston Celtics are in the midst of some big organizational changes right now. Those changes could potentially extend to their roster as well.

Smart, 27, is coming off a career-best season with 13.1 points and 5.7 assists per game. He is also the longest-tenured Celtic (having been with them since they drafted him in 2014) as well as their emotional leader of sorts.

But everything is on the table right now for Boston after the shocking news of longtime president Danny Ainge’s retirement and subsequent promotion of now-former head coach Brad Stevens to replace him. The team also just lost in a fairly one-sided first-round series against the Brooklyn Nets.

As for Smart, he will be entering the final year of his contract next season. Trade rumors have hovered over him since at least last year. Now they may be coming into focus again under the Celtics’ new Stevens-led front office.

Marcus Smart provided an update on the status of Jayson Tatum following Game 2 of the Celtics-Nets playoff series on Tuesday.

Tatum left Game 2 after being poked in the eye about four minutes into the third quarter and did not return.

#NEBHInjuryReport Jayson Tatum was poked in the right eye. He will be out for the remainder of the game.

Celtics coach Brad Stevens shared after his team’s 130-108 loss to Brooklyn that Tatum got his eyes scratched and wasn’t able to see well.

Brad Stevens says Jayson Tatum tried to readjust to the lights after getting his eyes scratched and he struggled and couldn’t return. His eye is red and swollen.

“Obviously, he is uncomfortable right now.”

Despite the discomfort Tatum dealt with, Smart says Tatum was in good spirits after the game and should play in Game 3.

Marcus Smart on Jayson Tatum's eye injury: "It was serious, but I don't think it's as serious as people thought. He was in good spirits after the game and should play in Game 3."

Tatum had nine points in 21 minutes before exiting the game. He will have plenty of time to heal prior to Game 3 on Friday in Boston. Game 4 of the series will be on Sunday

The Boston Celtics are poised to get a significant boost on Thursday as they start the second half of what has been a disappointing season so far.

Celtics guard Marcus Smart said he expects to return to the lineup Thursday against Brooklyn, having been sidelined since Jan. 30 with a calf injury.

Marcus Smart says he expects to return for tomorrow's game against the Brooklyn Nets, barring any setbacks between now and then. Smart has been out since hurting his calf Jan. 30 against the Lakers. Boston's struggles in February were, in large part, due to his absence.

Smart is an elite defender and a sparkplug, and Boston badly missed him in the month of February. His return should improve the Celtics’ depth and, more importantly, the team’s perimeter defense.

The Celtics were so poor in February that the team had to answer questions about the coach’s job status. Perhaps Smart can help silence those questions.

The two sides met earlier this week in what ended up as a 117-109 victory for Philadelphia. After the game, Smart threw shade at Sixers center Joel Embiid for alleged flopping.

Rivers responded to Smart’s comments on Friday, pointing out Smart’s own history of the exact same behavior.

“I think Marcus is an expert at that, so he would definitely know if Joel was doing it,” said Rivers, per Noah Levick of NBC Sports Philly. “Great actors know great actors, they always have.”

Embiid’s response to Smart was also in a similar vein. The 26-year-old guard is notorious for exaggerating contact and has drawn multiple fines from the league for flopping over the years.

Smart may be a two-time All Defensive First Teamer. But his reputation definitely still precedes him when he tries to makes comments like these.

The Philadelphia 76ers have a bad taste in their mouths after getting swept by the Boston Celtics last postseason, and now the rivalry may be growing.

The two sides met on Wednesday in what ended up as a 117-109 win for the Sixers. After the game, Celtics guard Marcus Smart expressed disgust with some perceived flopping by Sixers center Joel Embiid.

“[Embiid] alone shot 21 free throws, we shot 20,” said Smart, per Jared Weiss of The Athletic. “Can’t beat that … We got our hands up a lot of the times and [Embiid] flails and he gets the call. Meanwhile on the other end we attack and we don’t get the whistles. It’s tough playing like that.”

Embiid soon got wind up Smart’s comments and fired back.

“Marcus Smart just told me that I flail a lot? Come on,” Embiid said, per Derek Bodner of The Athletic. “I’m sure he knows himself and he knows his game. You know he does a lot of that.

“The game is physical,” added Embiid. “Other teams tend to try to be extra physical against me. I guess I’m just smarter than everybody else. If you’re gonna put your hand up there, I’m gonna take advantage of it and I’m gonna get to the free-throw line.”

Indeed, this is a classic case of the pot and the kettle. Embiid and Smart are both two of the more notorious floppers in the sport today. But while the former usually does it in an attempt to earn free throws, the latter mostly does it on the defensive end to try to draw an offensive foul.

These two players don’t exactly like each other either. Given their history, this war of words was probably inevitable.

Marcus Smart is now the longest-tenured member of the Boston Celtics, but apparently he is not an untouchable asset.

The Athletic’s David Aldridge hinted Monday that the Celtics may be open to trading Smart. Aldridge reports that the veteran guard is “not ungettable.”

The 26-year-old Smart averaged 12.9 points and 4.9 assists a game last year, both career-best marks. Smart also made the All-Defensive First Team for the second straight season. He has two years and $26.8 million remaining on his contract with the Celtics.

Smart’s defensive grit and vocal leadership have become key components of Boston’s identity. He can sometimes go a bit overboard with it however, so maybe that helps explain why the Celtics could be willing to part with him for the right price.

The Boston Celtics can now afford to laugh about their well-publicized locker room incident last week.

Celtics big man Enes Kanter posted a funny video on Monday of a wrestling match that he had with teammate Marcus Smart by the pool in the Orlando bubble. Kanter’s caption read, “We couldn’t settle the fight in the locker room so we took it out to the pool.” Take a look:

We couldn’t settle the fight in the locker room so we took it out to the pool
pic.twitter.com/9qNbtXrDwe

Smart, of course, was the primary combatant during the team’s locker room episode after a Game 2 loss to the Miami Heat. Reports did suggest however that it was a different Celtic, not Kanter, who Smart got into it with.

The Celtics bounced back in Game 3 on Saturday with a statement double-digit win against the Heat following the incident. Kanter’s funny post further confirms that the locker room fireworks are now all but behind them. Emotions boiled over for the Boston Celtics following their collapse against the Miami Heat on Thursday night, but head coach Brad Stevens is doing what he can to get the team focused for Game 3.

Marcus Smart was heard by several reporters “screaming” at teammates after the Celtics blew a 17-point lead in Game 2. According to ESPN’s Adrian Wojnarowski, Stevens met with Smart and Celtics leaders Kemba Walker, Jayson Tatum and Jaylen Brown late Thursday night in an attempt to clear the air.

ESPN Sources: Brad Stevens had a late night Thursday meeting with Celtics leaders – Kemba Walker, Jayson Tatum, Jaylen Brown and Marcus Smart – to work through emotions of post-Game 2 locker room. A lot of yelling in locker room, but nothing escalated to a physical confrontation.

The Celtics choked away a 17-point lead in Game 2 after blowing a 14-point lead in Game 1, so you can understand why tensions were high. Smart is the emotional leader of the team, and he and Jaylen Brown reportedly needed to be separated in the locker room.

If the Celtics can harness their anger in Game 3, they still have a chance in the series. The ugly locker room scene shows how much they care about winning.

Report: Marcus Smart, Jaylen Brown had to be separated in locker room Boston Celtics guard Marcus Smart was heard blowing up on teammates in the locker room following Thursday night’s meltdown against the Miami Heat, and it sounds like much of the shouting was directed at Jaylen Brown.

Several reporters heard Smart “screaming” in the locker room and objects being thrown. Shams Charania of The Athletic gathered more information about the situation and was told Smart and Jaylen Brown got into a heated argument and needed to be separated by teammates.

Smart reportedly stormed into the locker room after Game 2 and told his teammates they need to hold themselves accountable and stop blaming him when things go wrong. Brown shot back by telling Smart to calm down and that the Celtics need to stick together. That led to a tense exchange, but the situation was diffused before it became physical.

Smart also had arguments with a couple of assistant coaches during the game, according to Charania.

The Celtics are said to have quickly smoothed things over. One source confidently told Charania that “they will move past this and focus on the task.” Brown also had high praise for Smart following Game 2, though that was before the altercation.

“(Smart) plays with passion, he’s full of fire, and that’s what I love about him most,” Brown said. “He has that desire and that will, and we need him to continue to have that. We embrace each other, and who Marcus is, I love him for it.”

Smart is the emotional leader of the Celtics. He’s one of the best defensive players in the NBA and gives full effort at all times. He is also a very hot and cold shooter, and the Celtics are sometimes forced to live and die by his three-point attempts late in games. That may be what led to the finger-pointing that he blew up about, as Smart shot 5-for-13 from the field and 2-for-6 from three-point range in Game 2.

The Celtics are now facing a must-win in Game 3, so they have to brush the drama aside quickly. They may also get a big boost in time for the game.

Marcus Smart blew up on his teammates after the Boston Celtics blew a double-digit lead in Game 2 of the Eastern Conference Finals on Thursday night in Lake Buena Vista, Fla.

Boston led by 17 in the second quarter and 13 at halftime against Miami. They held a five-point lead with around five minutes left in the game and lost 106-101 to the Miami Heat.

According to NBA reporters, Smart was heard screaming in the Celtics’ locker room after the loss.

Marcus Smart is screaming at someone in the Celtics locker room — or several people. The yelling continues as Smart exits the locker room, swearing.

Both Washburn and Andrews said they could hear items being thrown in the locker room.

Smart wasn’t the only one yelling. There were definitely items thrown and a lot of yelling. #Celtics

Boston lost a tight contest to Miami in overtime in Game 1 on Tuesday. They have fallen behind 2-0 in the playoff series against a tough team, and they had a very good chance to even the series. It’s easy to see why they would be so frustrated after the game.

Getting heated after a game is nothing new for Smart, but the circumstances surrounding this incident are especially painful.