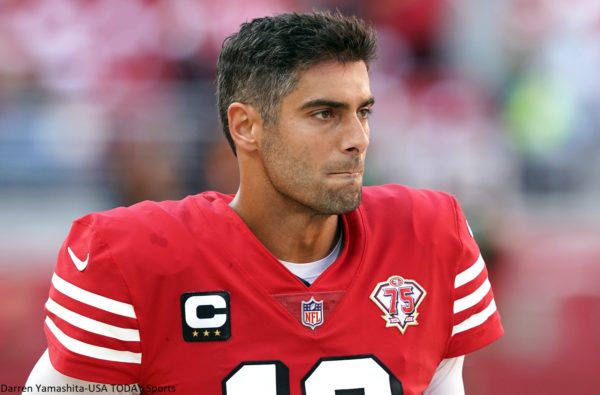 San Francisco 49ers coach Kyle Shanahan has been adamantly behind Jimmy Garoppolo as the team’s starter in 2021. That could clearly change next season.

Shanahan spoke about the 49ers’ potential 2022 quarterback situation on Wednesday, and it sounded like good news for Trey Lance. Shanahan admitted that Garoppolo could be back in 2022, but made clear that Lance is viewed as the long-term option.

Kyle Shanahan says that it’s possible that Jimmy Garoppolo is with the 49ers in 2022, with the caveat we all know:

"There's a chance for anything, but I think we've made it clear that Trey is our guy of the future.”

Garoppolo is under contract for 2022, but it will cost the 49ers essentially nothing to move on from him after June 1. Doing so and clearing over $25 million in cap space appears to be a no-brainer, particularly with Garoppolo putting together an unconvincing season.

On the other hand, Shanahan doesn’t seem totally sold on Lance yet either. The 49ers still believe in him, but may want to see more progress prior to 2022.

The disturbing situation involving Minnesota Vikings defensive end Everson Griffen has been resolved safely, according to the team.

In a statement released Wednesday afternoon, the Vikings said they had been informed by law enforcement that Griffen “came out of his home without incident and is now getting the care he needs.”

An update from the @Vikings regarding DE Everson Griffen: pic.twitter.com/X9g11ohUHA

Griffen sent a series of disturbing social media posts earlier Wednesday. Law enforcement was dispatched to Griffen’s home, and the 33-year-old was refusing to come outside.

Griffen has struggled with mental health issues in the past. In 2018, he tried to break into a teammate’s home and escaped an ambulance when taken into custody. Griffen’s agent later said Griffen was not diagnosed with a serious mental health issue and that the incident was a result of stress.

The Packers are prepping for Sunday’s game against the Los Angeles Rams and a quarterback they know well. Matthew Stafford has played the Packers 20 times in his career during his time with the Detroit Lions, so longtime Green Bay players know him well.

Amos is one of them, and he has plenty of respect for Stafford. In his words, it was the Lions that held back Stafford and not vice versa.

Painful but true. After all, Stafford and Bobby Layne are the only two quarterbacks in Lions franchise history to make the postseason in three separate seasons with the team. Now that he’s playing with a strong contender, Stafford is having one of the best years of his career, with 24 touchdowns to eight interceptions.

It’s clear the Packers won’t be taking Stafford lightly. After all, Aaron Rodgers was even more effusive in his praise for his former division rival.

The Florida Gators and Virginia Tech Hokies may be competing with each other for one head coaching candidate.

Louisiana coach Billy Napier is poised to be a hot candidate for bigger schools as the coaching carousel heats up, and that already appears to be the case. Florida is interested in bringing him in to replace Dan Mullen, and is aware of interest from Virginia Tech as well, according to Bruce Feldman of The Athletic.

Have heard Florida has genuine interest in Billy Napier and knows that Va. Tech does too. Interesting dynamic on the carousel right now: https://t.co/lkU572ig4V

The interest in Napier is no surprise. He has already won ten games in a row with the Ragin’ Cajuns for the third straight season, and his reputation is growing. He has no experience as a head coach in a power conference, though he has notably served as an assistant under Nick Saban at Alabama.

Virginia Tech would seem unlikely to be able to match Florida in a head-to-head battle for a coach. That might be one reason they’re looking at other candidates as well. Either way, Napier appears likely to have the chance to land a better job if he wants it.

The Chicago Bears won’t have Justin Fields for Thursday’s game, with Andy Dalton set for a Thanksgiving showcase instead.

Fields suffered a rib injury in Sunday’s loss to the Baltimore Ravens. While the issue does not sound exceptionally serious, the turnaround time is simply too short for Fields to play Thursday, according to Ian Rapoport of NFL Network.

Sources: #Bears QB Andy Dalton is expected to start on Thursday, with Justin Fields dealing with a rib injury. He spent the day undergoing further testing, and the turnaround is too quick.

Fields has been thoroughly beaten up this season. He’s been sacked a league-worst 31 times in ten games, and took two more on Sunday against Baltimore before leaving the game. He has four touchdowns and eight interceptions on the season.

Dalton has struggled as well this season, but a game against the lowly Detroit Lions might be what he needs. It sounds like he may have started Thursday either way based on some of coach Matt Nagy’s recent comments. Luka Doncic has not played in a week after injuring his knee and ankle last Monday. Just as he looked to be on the verge of a return, the issue appears to have gotten worse.

Doncic took part in a five-on-five scrimmage on Monday and appeared to be moving closer to a return to action. However, reporters that were conducting a post-practice interview with coach Jason Kidd heard Doncic yelp in pain and retreat to the bleachers, where his left knee was iced and bandaged.

A few mins after this video, Luka slammed the bleachers, shouted in pain.

Didn’t see what happen bc reporters were talking to Jason Kidd, but Luka left practice with ice bandaged around his left knee.

Just as this happened, Kidd said Luka is “questionable” tomorrow.

Given how abruptly the issue came about, the Mavericks obviously didn’t have much of an update. It certainly seems that Doncic aggravated something, and his status for Tuesday’s game against the Los Angeles Clippers appears to be in more doubt.

Doncic has already missed three games with the ailment. He got off to a slow start to the season and his shooting percentages had been down, much to his frustration, but he had started to pick it up prior to suffering the injury.