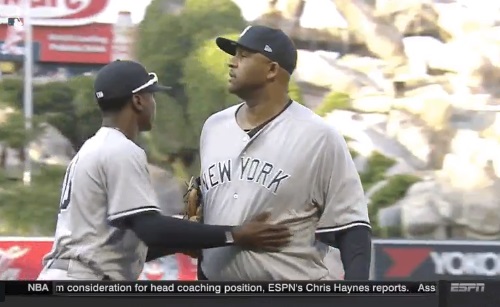 CC Sabathia had some words for umpire Angel Hernandez after a missed strike call in the third inning of the New York Yankees’ 2-1 win over the Los Angeles Angels on Sunday night.

Sabathia thought a 1-2 pitch to Justin Upton should have been called a strike. After Upton grounded out to end the inning, Sabathia cursed at Hernandez.

Sabathia said after the game that his comments to Hernandez had to do with the strike zone.

CC Sabathia, when asked what happened between him and home plate umpire Angel Hernandez, said: "Thought I was throwing strikes."

Both the Yankees and Angels seemed to be frustrated with Hernandez during the game. Making terrible calls has long been Hernandez’s specialty.