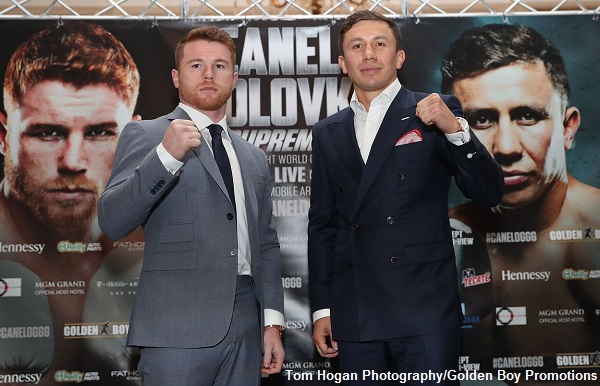 Canelo Alvarez and Gennady Golovkin will meet on Saturday night at T-Mobile Arena in Las Vegas for what will be the most significant boxing match of the year. This is a rematch of last year’s fight, which was controversially called a draw, paving the way for the 2018 rematch. Larry Brown Sports will be on hand to provide coverage of the rematch, and we’re already thinking there could be a third match between the men.

Here is our preview of the major boxing match.

The first fight between Canelo and GGG did 1.3 million pay-per-view buys. While an $84.99 HD price for the fight is high, this fight should sell well thanks to the popularity and skill of both participants.

The hate is real after positive PED test

While the two fighters may have been faking any dislike in order to sell the first fight, that no longer appears to be the case. There is a genuine dislike between the fighters owing to the events that transpired since their first fight. Canelo tested positive for clenbuterol in March, which he blamed on eating contaminated meat. GGG then accused the Mexican fighter of using PEDs before their first fight. Alvarez received a six-month suspension that put their plans to fight on Cinco de Mayo on hold, pushing the fight back to the current September date.

Not only is Canelo returning from a suspension, but there are two other issues to watch. Alvarez was wearing a knee brace during training because of a knee surgery he underwent earlier in the year. He also has not fought since their first bout, which was a year ago on Sept. 16, 2017. His time out of the ring could be a factor. By comparison, GGG kept his scheduled May 5 fight date and beat Vanes Martirosyan.

GGG’s trainer Abel Sanchez also has made it known that he has issues with the wraps Alvarez used in the first fight. He does not want Alvarez to “stack” when he gets wrapped. Sanchez also complained about referee Tony Weeks, who was initially recommended to officiate the fight. Instead, Benjy Esteves Jr. was selected to be the referee in the ring.

Each fighter’s keys to victory

Canelo has to be aggressive and smart. His best course of action would be letting GGG chase him and punch himself out. Alvarez needs to keep his emotions in check if he wants to win. If Canelo gets knocked out early, he’s out hundreds of millions in future fights/endorsement money. This is for the legacy of his career, so he has to do his best to go the distance. He also cannot afford to give up the middle rounds.

Golovkin has to attack the body even more. His jabs were great in the first fight; he needs to add more body shots and take counter-shots by Canelo. Cutting off the ring to prevent Canelo from running will be crucial.

GGG wins in a decision. I don’t think anybody is getting knocked out.