Kirby Smart reveals what ticked off Georgia before game

Kirby Smart on Monday night led Georgia to its first national championship since 1980. After previously going 0-4 against Nick Saban, Smart led his Bulldogs to a 33-18 win in the CFP title game.

“There were people who said we weren’t conditioned enough. And it pissed a lot of people off on our sideline. And they came to work,” Smart said in his postgame interview with ESPN’s Molly McGrath.

The issue Smart pointed to is an odd one. Georgia’s conditioning hardly registered as a pregame storyline.

The only time conditioning was mentioned was a few days before the game when Jordan Davis said his conditioning for the SEC Championship Game was off.

Georgia DL Jordan Davis said he wasn’t in the proper condition for the first Alabama game. He’s going to go run this morning after these interviews, he said.

Few others talked about conditioning.

You know what this means? It means that Smart is manufacturing his own slights in order to motivate his team. He really does take after Nick Saban. James Cook delivered one of the biggest plays we have seen in a CFP national championship game.

Cook broke for a 67-yard run late in the third quarter of the championship game between Georgia and Alabama to set up the first touchdown of the game.

The big rush from Cook was the longest in the history of the CFP title game.

James Cook's 67-yard rush to set up the touchdown was the longest rush in the eight-year history of the CFP national championship game.

It was also the longest run allowed by Alabama since Georgia’s Nick Chubb in 2015.

Also the longest run given up by Bama in any game since Georgia’s Nick Chubb in 2015 #NationalChampionship https://t.co/XohVFCPTF2

Though Cook made the big play, it was Zamir White who later punched it in from a yard out to give Georgia the lead. The Bulldogs took a 13-9 lead in the game, though Alabama answered the touchdown with a field goal to make it 13-12 in the fourth quarter.

Everyone made the same joke about the Alabama-Georgia game 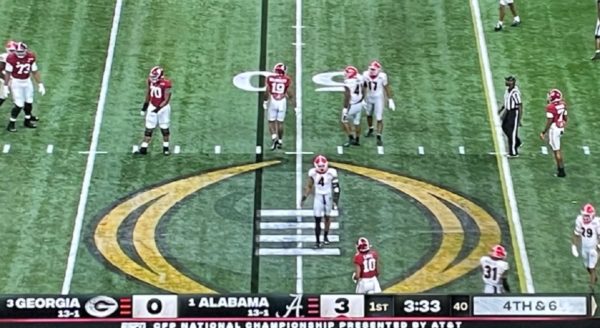 The first half of the CFP National Championship Game between Alabama and Georgia at Lucas Oil Stadium in Indianapolis on Monday night was low-scoring, which led to plenty of jokes.

Bama led Georgia 9-6 at the half. There were five field goals and no touchdowns through the first two quarters. The game very much resembled a low-scoring field goal affair more common among Big Ten teams, which was fitting considering the game was played in Indy — the site of the Big Ten Championship Game.

You can bet that wasn’t lost on the fans. Take a look at some of the tweets:

I’m counting this first half as win for the B1G. Our football is on display

It looks like a B1G title game out there. Stadium and all. https://t.co/s13GlKsX0j

I thought everyone told me that there weren’t any more B1G football games this season. Why are people lying to me?

Play a CFP championship game in Big Ten country and it brings out the inner Iowa even in SEC teams.

This is just what happens when you go to Big Ten country. Jameson Williams went down with a left knee injury during the national championship game on Monday night between Alabama and Georgia.

Williams caught a 40-yard pass down the middle of the field on Bama’s first play after a touchback following Georgia’s field goal to tie the game at 3 in the second quarter. The Crimson Tide wide receiver tried to plant and his left knee got hurt.

Williams went down and was seen grabbing his left knee.

Jameson Williams was injured on this play: pic.twitter.com/gfNZ7OAMkH

Williams had four catches for 65 yards prior to his injury. He was seen going into the medical tent and then walking unaided on the sideline. The junior entered the game with 75 catches for 1,507 yards and 15 touchdowns. Alabama offensive coordinator Bill O’Brien was a very unhappy man at the end of his team’s first drive in Monday’s national championship game.

The Crimson Tide were set up for 3rd and 5 from the Georgia 19-yard line, and O’Brien broke out a perfect play call that would have set Alabama up with 1st and goal at the very least. Unfortunately, tight end Jahleel Billingsley slipped on the route, leading to an incompletion.

O’Brien’s reaction to the play not coming together was caught on camera, and it was an all-time great freakout.

O’Brien looked like he was running through every curse word in the book there. Considering how well the play was drawn up, it’s tough to blame him for his frustration.

This is not the first time we’ve seen O’Brien lose his temper on camera. You can’t say he isn’t passionate. Georgia fans were having a gay old time on their way to Indy and while in Indy for the championship game between their Bulldogs and the Crimson Tide. Videos have been going viral on social media showing Georgia fans chanting all throughout various locations on their way to the game.

Humphrey happened to be on a plane with a bunch of Georgia fans and felt very much out of place.

I apparently hopped on the wrong plane heading to Indianapolis pic.twitter.com/0UschpFbl7

Humphrey played at Alabama in 2015 and 2016 before becoming a first-round pick by the Ravens. He was knocked out for the season in early December by a pec injury.

Next time he should gather up some more Tide fans to travel with him so he can have some more backing on his flight!