The first way to do the Topszn gesture is the way Manziel does it after touchdowns. He puts both hands up and rubs his fingers together like the sign for getting money: The other way involves a second person. One sprinkles the money downward and the other is on the receiving end. Manziel did this with one of his teammates during the Rice game: He also did it during A&M’s spring game and shared the picture with Drake crew members OVO Ryan and OB O’Brien:

The gesture has even hit the baseball diamond, where Detroit Tigers teammates Prince Fielder and Miguel Cabrera did the Topszn several months ago, as OB O’Brien shared on Instagram: 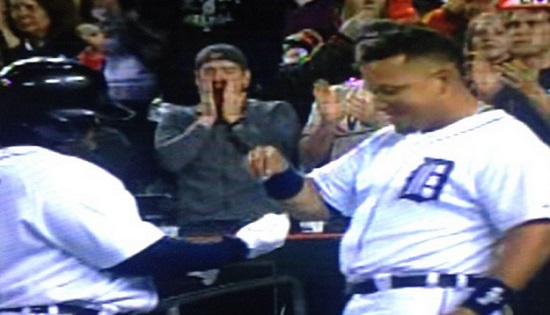 There is no real explanation for what the gesture represents, but it’s pretty clear it’s about money.

Not only does it look like a “get money” type of gesture, but there seems to be some confirmation of that in Drake crew member OB O’Brien’s music video “I Don’t Like.” At around the 1:37 mark in the video, two guys do the Topszn Regime gesture. OB O’Brien seems to be on the bottom end and holding a pipe and bag in his hand. The image of dollar bills is shown raining down: When Manziel caught some flak for doing a “money gesture” during the Rice game, some people defended him by saying it wasn’t an autograph/NCAA taunt, but rather a gesture the Heisman Trophy winner had been doing since last season. That is partially correct.

The first time we saw Manziel doing the gesture was last year during the upset win over Alabama in Tuscaloosa (if you know of other times he did it last season, please let us know): Based on watching some highlights last season, it seems like Manziel did more of the conventional point to the sky after most of his scores. He didn’t really seem to get into the whole Topszn thing until after hanging out with Drake’s crew over spring break. After that, he was just all about OVO/Drake/Topszn/The Regime.

Head over to Page 3 of the story to see how deep into Topszn Manziel became after the spring break trip.