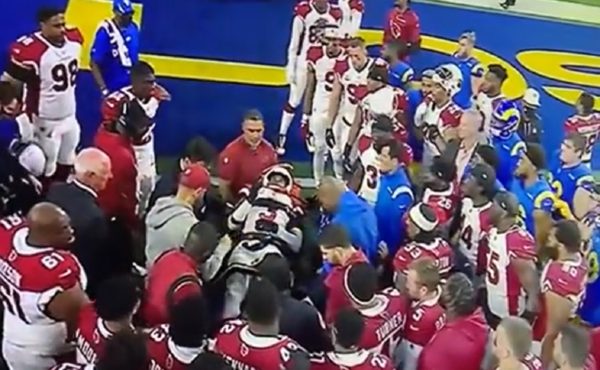 Arizona Cardinals safety Budda Baker exited SoFi Stadium on a stretcher during Monday night’s Wild Card game against the Los Angeles Rams, but fortunately he appears to be on the mend.

Baker suffered a concussion on a collision with Rams running back Cam Akers while making a tackle late in the third quarter. He laid flat on his back after the play and appeared to be seriously injured. Baker was taken to a local hospital, and he provided a positive update early Tuesday morning.

Thank you all for the prayers. I am doing good 🙏🏾

While we don’t know the full extent of Baker’s head injury, it is certainly a good sign that he felt well enough to send a tweet reassuring fans.

Baker, a four-time Pro Bowler, had four tackles in the game. Cardinals head coach Kliff Kingsbury said after that he had been told Baker had feeling in all of his extremities.

Akers appeared to taunt Baker on the play where Baker got injured (video here), but the running back later apologized and said he didn’t realize what had happened.

The Cardinals were eliminated from the postseason after the Rams blew them out 34-11.