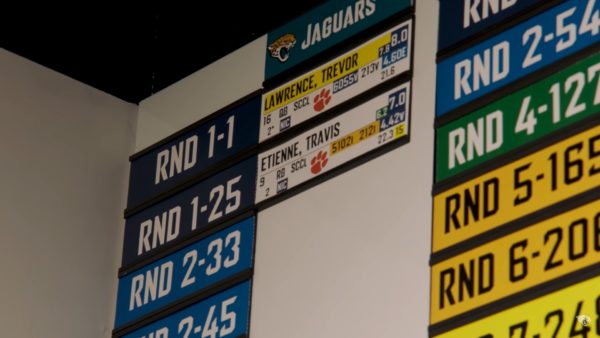 It’s no secret that all NFL teams do their own prospect evaluations leading up to the NFL Draft. The ratings give a window into what teams thought of potential draftees. But the numbers almost always stay secret.

The Jacksonville Jaguars, whether intentional or not, didn’t really care about keeping some of their own ratings secret. The team’s behind-the-scenes video series “The Hunt” included video from inside the team’s war room. Unusually, the finished video does not blur out any of the draft grades, even for players not selected by the team.

Eric Edholm of Yahoo Sports pointed out that Trevor Lawrence, the team’s first overall pick, received an 8.0 under the team’s grading system. Interestingly, that’s the same grade the Jaguars assigned to Alabama wide receiver Jaylen Waddle, who went No. 6 overall to the Miami Dolphins. For context, while we don’t know the exact system the Jaguars use, the typical scale goes from 3.0 or 4.0 up to 9.0, suggesting the Jaguars viewed both Lawrence and Waddle as high-level prospects. Had Jacksonville’s quarterback need not been so great, one has to wonder if Waddle may have even been in contention for the top pick.

A few other grades could be visible in the video. Quarterback Zach Wilson, the second overall pick, got a 7.0 from the Jaguars. A few players drafted later in the first round, namely linebacker Jaelan Phillips and offensive lineman Ali Vera-Tucker, got 7.5 ratings. Travis Etienne, the Jaguars’ other first-round selection, got a respectable 7.0 grade. The most underwhelming grade visible for a first-rounder went to new Indianapolis pass-rusher Kwity Paye, who got what appeared to be a 6.8.

A few other second- and third-round selections are visible, but those aforementioned ratings are the biggest ones of interest. The ratings suggest that the gap between Lawrence and Wilson, at least in the scouting department’s eyes, was pretty wide. It also seems to indicate that the Jaguars probably think the Dolphins had a pretty good first round.

It’s probably not great that none of this was blurred. Some players could take it as motivation, while others could use it to second-guess the team if, for example, Wilson ends up having a much better pro career than Lawrence. That said, it’s an interesting look behind-the-scenes at a key part of draft prep that we don’t normally have access to except through rumors and hearsay.