Jared Allen says the NFL is becoming safer for offensive players, not defensive 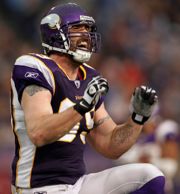 With all the emphasis on making the NFL safer for players by cutting back on head shots and hits on defenseless receivers, we tend to forget one important thing: What about the guys on the other side of the ball? Rules have developed over the years in such a way that passers and receivers are subject to less abuse, but as Jared Allen reminds us defensive players have to take a beating as well.

“Let’s not pretend they’re making it safer for everybody,” Allen told KTAR in Phoenix according to Sports Radio Interviews. “It’s safer for offensive players. I mean, a wide receiver or tight end can still motion from the outside in on a pass play and just absolutely blindside a defensive end across the formation. … We can still hit running backs pretty much any which way we want.

“So I think there’s an emphasis on — obviously there’s no more head shots, they talk about concussions. I think there’s a bigger problem because of these so-called concussion-proof helmets. Guys kind of throw caution to the wind. I’ve been rocking the old-school Riddell for a while and I just know it’s limitations, you know what I mean? So I don’t know, I mean, we’ve had a lot more head injuries, and maybe they’re just getting reported I feel like in the last few years.”

Obviously offensive players tend to have more moments of vulnerability during a game, but there are still ways in which offensive lineman can legally dive at the knees of the defense. When a guy like Hines Ward threw helmet-to-helmet shots on defensive backs, many viewed it as hard-nosed football and not dirty play. Defensive players could argue that Roger Goodell is protecting the skill players, not the entire league.