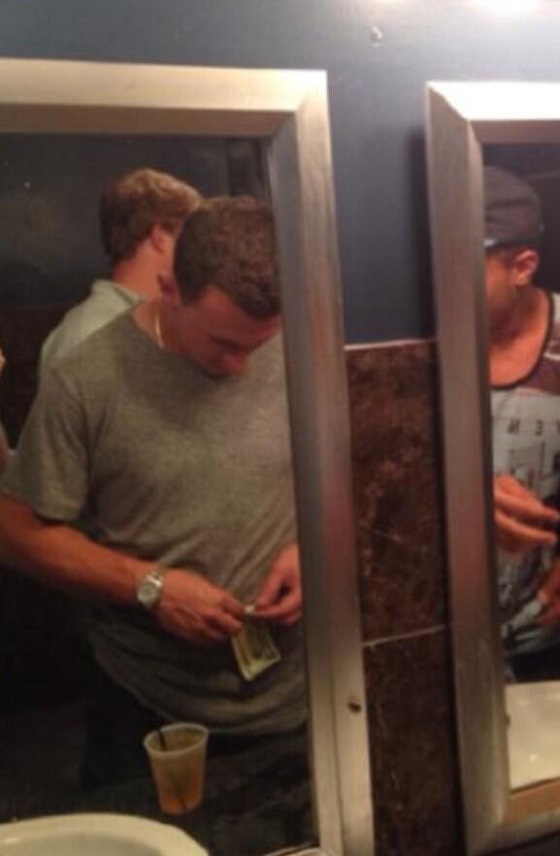 Things are really getting out of hand in terms of how much Johnny Manziel is covered and hounded by the media and public.

I mean the guy goes to Las Vegas for July 4th weekend, and he can’t even make it through without some photo emerging insinuating nefarious activities.

Busted Coverage received the photo seen above and says they were sent the picture by an emailer who says it’s of Manziel rolling money in a bathroom. Manziel was in Vegas for the weekend and there are other pictures showing Manziel in the same exact gray shirt and gold chain. This is Manziel with model Dallas Nicole wearing the same clothes: Norm Clarke of the Las Vegas Review-Journal has some details on Manziel’s weekend:

Spies said he stayed in the Real World Suite at the Hard Rock Hotel & Casino with friends, partied at XS nightclub at Encore and dined at STK, the steakhouse at The Cosmopolitan.

I’m not really sure why people take a look at that photo of Manziel and automatically conclude he was rolling bills in a bathroom for the purposes of snorting cocaine.

What, like you’ve never rolled money in front of a bathroom sink before?

What if those weren’t even dollar bills in the picture? Or what if he was rolling the bill in his hand to grease the bathroom attendant, security guard or someone else? Or heaven forbid he actually used the bill to wipe his nose because he’s rich and can do that sort of thing, and he was just rolling up all the snot. Don’t act like you wouldn’t do that too if you were a millionaire.

You people can go out there and jump to your own unfair, ridiculous conclusions all you want. Just know that when it comes down to it, there is always one site who will have Johnny Manziel’s back, defending him every time silly stories come out trying to get him in trouble. For all we know, just like that picture of Manziel’s Heisman Trophy holding a blunt, this can be a total fake or plant job by some jealous fans looking to railroad the guy’s career. Everyone’s always out to bring down this guy. Manziel’s the real victim here, just like he was when this picture came out, too.

Don’t worry, Johnny, we have your back. Keep doing your thing and don’t let these ridiculous stories bring you down.

Joe Burrow has grown into one of the more talented and confident quarterbacks in the NFL, but there was a point when a career in professional football seemed unlikely for him. During a one-on-one interview on NBC Sports’ “Chris Simms… Those who feel they didn’t get enough out of the first meeting between Floyd Mayweather Jr. and Conor McGregor may have a second fight to look forward to. Fight Hype reported on Thursday that Floyd and McGregor are in talks…

Report: Kevin Durant may not ask for trade from Nets

Kevin Durant’s commitment to the Brooklyn Nets has reportedly been in jeopardy due to Kyrie Irving’s questionable future with the team. But there’s a chance that Durant sticks around even if Irving were to leave. ESPN’s Adrian Wojnarowksi reported on… Stephen A. Smith has hilarious reaction to Knicks draft trade

Stephen A. Smith was not pleased with the moves the New York Knicks made during Thursday’s NBA Draft. Prior to the Knicks’ No. 11 pick being announced by NBA commissioner Adam Silver, Smith and fellow Knicks fan Spike Lee knelt… The Detroit Pistons drafted Purdue guard Jaden Ivey Thursday with the fifth overall pick in the 2022 NBA Draft, and they have no intention of trading him. After the Pistons selected Ivey, reports surfaced that multiple teams were were attempting… Chet Holmgren was the No. 2 overall pick in the 2022 NBA Draft, but he was No. 1 when it came to his jewelry. The former Gonzaga star wore a large chain to the draft that had a pair of…