Tom Brady has been on a roll on social media since the Tampa Bay Buccaneers won the Super Bowl, and he continued his heater with a response to one of Justin Bieber’s posts this week.

Brady, who has become somewhat of a master in self-deprecation, shared a hilarious old photo of himself on Twitter in response to Bieber doing the same.

Brady did that photoshoot early in his career with the New England Patriots, and his teammates have roasted him for it ever since.

Assuming Brady doesn’t create his own tweets, he should probably think about giving his social media manager a raise. Between the goat picture and the hilarious tweet he sent about being drunk at the victory parade, Brady has truly hit his Twitter stride. Dick Bremer is probably hoping it isn’t too late to say sorry to Shane Bieber.

Bremer would eventually correct himself. He also hilariously tried to play off the mistake by intentionally referring to broadcast partner Justin Morneau as “Shane Morneau.”

For Shane Bieber, being mistaken for the Canadian pop singer is certainly nothing new. In fact, he even has a funny nickname that references it. So Bremer can rest easy knowing he didn’t say anything that Shane hasn’t already heard a hundred times before.

Cleveland Indians starting pitcher Shane Bieber has grown used to hearing comments about a certain pop icon he shares a last name with, but the references reached a new level of insane this year when a baseball card manufacturer accidentally called him “Justin” on the back of his card. If it makes Shane feel any better, Justin loved it.

Shane Bieber sent a funny tweet over the weekend showing how his latest Topps Stadium Club card referred to him as “Justin” in the blurb under his name.

Shane probably wasn’t surprised. After all, this is the guy who had “Not Justin” on the back of his jersey last year when players wore nicknames for Players Weekend. He has also had teammates needle him by changing his warmup music to Justin Bieber songs, so this is nothing new.

On Sunday, Justin Bieber shared his thoughts on the embarrassing Topps flub. He said it’s another reason he feels a “special connection” with Shane.

I feel like we have a special connection https://t.co/fv80Lf8ABu

Isn’t that nice? We don’t know if Shane feels that same connection, but he definitely takes the mix-ups in stride. He even appreciated the apology he got from Topps.

Justin Bieber has found his way into the sports conversation numerous times over the years, but the connections to Shane are apparently a bit deeper. We wonder if the right-hander feels the same.

Justin Bieber wants to fight Tom Cruise in the octagon and is hoping the UFC will make arrangements.

Bieber tweeted on Sunday night about his desire to face Cruise and asked who was willing to put on the fight. He tagged UFC president Dana White in the tweet.

I wanna challenge Tom Cruise to fight in the octagon. Tom if you dont take this fight your scared and you will never live it down. Who is willing to put on the fight? @danawhite ?

The consensus seems to be that Cruise would destroy Bieber in an MMA match. But you never really know what will happen until the bell rings. It would be a battle between the Church of Scientology and the Hillsong Church.

If they’re able to make this fight happen, we’d love to see it.

The Boston Bruins knocked the Toronto Maple Leafs out of the NHL Playoffs on Tuesday with a Game 7 victory, and one of their players celebrated the win with a victory lap around Justin Bieber.

Bieber was spotted at the game in Boston, and the Ontario native made it no secret that he was rooting for the Leafs to advance. The Bruins claimed a decisive 5-1 victory, however, leaving the singer disappointed.

Perhaps even worse was the fact that Bruins winger David Pastnak went straight to the locker room and took to social media to troll him about it.

Pastrnak could have done plenty of things after closing out the Leafs. He went after Bieber, which is really quite hilarious. The pop singer will have to pick another team to back for the playoff run. Luckily, he doesn’t seem to have any aversion to doing so, though Pastrnak may have taken the Bruins out of contention for his support. 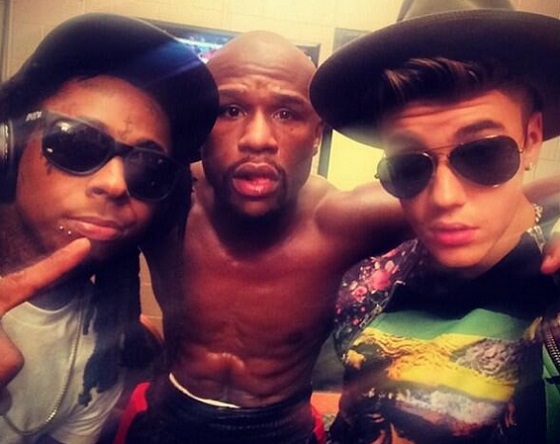 Justin Bieber is going through yet another one of his image makeovers, and the latest has apparently had a serious impact on his relationship with Floyd Mayweather Jr.

Sources close to both Bieber and Mayweather told TMZ that Bieber’s mentors from the Hillsong Church have been counseling the pop star about distancing himself from friends who may be bad influences. That advice inspired Bieber to take a look at his friendship with Mayweather, and he ended up unfollowing Floyd on Instagram. According to the report, Floyd went “nuclear” and is “incensed.”

We’re told church pastors did not single out Floyd as a bad influence, but Justin decided on his own he needed some distance. Our sources say Justin didn’t want a clean break from Floyd, he just wanted to “reset boundaries” … walling himself off from things like Floyd’s obsession with strip clubs.

Justin unfollowed Floyd on Instagram as part of the resetting of boundaries, and our sources say Floyd went “insane, nuclear.” He lashed out at Justin, called him a “traitor” because Floyd had stuck with Justin during his meltdown when everyone was attacking Bieber.

Mayweather brought Bieber into The Money Team several years ago, and Bieber even carried the undefeated boxer’s title belts to the ring before a fight. In fact, Bieber was almost banned from visiting a certain country a while back because of his outspoken affiliation with Mayweather.

Can’t we all just get along? Mayweather has a lot on his mind with the Conor McGregor fight less than a week away, so perhaps he can schedule some couples therapy sessions with Bieber after the bout.

It is a risky proposition for any athlete or team to get involved with Justin Bieber, but that’s exactly what Ole Miss football has done.

Weeks after Bieber defended his habit of wearing pretty much every jersey he can get his hands on, the Rebels’ football program saw a promotional opportunity. On Friday, they announced to the world that they were sending Bieber one of their new football jerseys.

We are biased, but we think our @Nike jersey looks cool… It's coming your way @justinbieber! #HottyToddy pic.twitter.com/XGrRk8lpTu

Even the best-laid plans can be foiled, though, and the Rebels were roundly mocked for their move.

In fact, the harshest critics were Ole Miss’s own fans and alumni, who really brought the jokes.

Is this one of our self imposed sanctions?

This is the most embarrassing thing we've ever done.

Given the scandals that have surrounded the football program lately, Ole Miss was probably just looking for some good publicity. You tried, guys. You tried.

Justin Bieber defends himself for supporting so many different sports teams

Justin Bieber has long been mocked by some for having the appearance of a bandwagon sports fan, and now he’s responding.

Over the past several years, the famous singer has worn jerseys or other sports gear showing his support for some teams. Recently, he has donned Cleveland Cavaliers and Pittsburgh Penguins gear, showing support for teams that reached the NBA and NHL finals this year.

Critics call out Bieber for not being a true fan. For instance, they say that since he’s a self-professed Toronto Maple Leafs fan, he shouldn’t wear the gear of other NHL teams.

At least we made it farther than the Montreal Canadians ! This young team has so much potential! Let's go all the way next year!!!! Btw favourite picture me and my little bro crushing life!

Well as Game 4 of the Stanley Cup Finals were about to start on Monday, Bieber finally decided to address his critics. He sent the following tweets:

I also don't know enough about sports to Really have valid opinion but I do enjoy sports!! And enjoy any high level sports game. Any team

Bieber has a large fan base and a lot of people to show love to. If that means putting on the jersey of a team to show them love, it’s all good. We still know that his roots are with the Leafs, as he’s said. But nobody will ever confuse him for being a hardcore sports fan.

Justin Bieber gets in fight after Cavs game, brags on Instagram

Justin Bieber was in Cleveland for the NBA Finals on Wednesday night, and the skinny pop star ended up throwing some haymakers at a guy who was roughly twice his size.

A fan sent footage to TMZ of a fight between Bieber and someone else that supposedly took place outside a hotel in downtown Cleveland at around 11 p.m. Bieber ended up at the bottom of the pile, but it didn’t really look like punches from either side landed.

A second clip showed Bieber being restrained by a Golden State Warriors fan shortly after he went down. A witness told Entertainment Tonight that the fight started when Bieber was talking to a girl who was with the guy he threw swings at.

“[Bieber] was apparently talking to the girl this guy was with, and when the guy stepped in, Biebs told him he would f— him up,” the witness said. “That’s when fists started flying.”

On Thursday afternoon, Bieber shared a photo on Instagram and noted that he didn’t end up with any marks from the fight. The picture has since been deleted.

Bieber is a big fan of making headlines for the wrong reasons, which is why it’s no surprise that he hangs out with this NFL quarterback. In many ways, the two are made for each other. Johnny Manziel has basically been partying nonstop since the NFL regular season ended, and his adventures have involved a number of celebrities and well-known people. It would appear the latest is Justin Bieber.

Early Sunday morning, Manziel shared a photo on Instagram of himself and Bieber hanging out:

It’s unclear when the photo was taken, but this would not be the first time Manziel and Bieber have hung out. They partied together a couple years back (photo here) at Bieber’s house in Beverly Hills, and police reportedly came to the house twice because of noise complaints.

Manziel, currently a free agent, recently partied with a famous chef in Las Vegas. Prior to that, he was spotted at another club with this reality TV star. NFL teams must be loving Manziel’s newfound focus.