Teams across the NFL are trying to adjust to the new normal that involves much stricter standards for taunting penalties. That includes the Kansas City Chiefs, who are getting an earful about it from offensive coordinator Eric Bieniemy.

Bieniemy has been consistently confronting Chiefs players about taunting flags. His message is that like it or not, things that did not used to be an issue are now being enforced. He even offered a solution to players: simply hand the football back to the officials after making a play.

“The thing that we stress to our guys (is that) this is a point of emphasis, so regardless of what you might seem to think that it’s harmless, that’s not the case anymore,” Bieniemy said, via Sam McDowell of the Kansas City Star. “We need to go back to the days of just handing the ball to the ref — get in the end zone, celebrate with your guys, and then we go on from there.”

Bieniemy has been so fixated on taunting calls that when running back Clyde Edwards-Helaire was flagged for pointing at a linebacker while crossing the goal line against Dallas, other Chiefs players intercepted the running back to send the message before Bieniemy even could.

You could certainly argue that it’s silly that taunting has to be this much of a focus. Bieniemy is simply doing what every team should, though. Teams have lost games because of nitpicky taunting flags this season. Whether you like the rule or not, Bieniemy absolutely does not want his team to find itself in that sort of situation. A big couple of months for Atlanta Braves shortstop Dansby Swanson has gotten even bigger.

Swanson and U.S. soccer star Mallory Pugh on Thursday announced their engagement. Pugh posted pictures of the proposal on her Instagram, as did Swanson.

Pugh was a member of the United States’ FIFA World Cup-winning team in 2019, and has scored 18 total goals for the national team. She currently plays for the Chicago Red Stars of the NWSL. Swanson is fresh off his World Series win with the Atlanta Braves, and he contributed two home runs in the series against Houston.

Swanson and Pugh met through Swanson’s former Braves teammate Jace Pederson, who is married to Pugh’s sister. They started dating in 2017 and have not been shy about the relationship. Congratulations to them both. The New York Knicks continue to run into trouble with referees, and tensions boiled over early during Thursday night’s game.

The Knicks struggled early against the Chicago Bulls, and the situation was exacerbated with what Knicks players clearly saw as unfavorable officiating. Reserve center Taj Gibson was called for illegal screens on back-to-back offensive possessions, and the veteran completely lost his composure after the second one.

Gibson angrily yelled and gestured at the officials, and was quickly ejected after picking up a pair of technical fouls.

Taj Gibson gets ejected after getting called for an offensive foul 😬 pic.twitter.com/XUO1JgP4pP

The Knicks were already playing shorthanded with Nerlens Noel out, so Gibson’s ejection was a significant blow. He simply has to keep his composure better than that. On the other hand, the second technical was a very quick trigger, and there’s a good argument that the officials overreacted in this instance.

This comes on the heels of Knicks star Julius Randle complaining about how referees treat him during games. The team comes away preoccupied with the officials at times, and it’s probably not helping. Brian Kelly’s LSU tenure has gotten off to an awkward start, as he has struggled to get any of his former Notre Dame assistants to follow him to Baton Rouge.

Defensive line coach Mike Elston also turned down the chance to follow Kelly to LSU. He announced his decision in a very public way.

According to John Brice of Football Scoop, director of football administration Beth Rex is essentially the only notable name to leave Notre Dame and join Kelly at LSU.

With Kelly already the subject of criticism and mockery for how his departure was handled, social media had a field day reacting to this series of rejections.

Brian Kelly looking at all his assistants he’s bringing to LSU. pic.twitter.com/hk9dV5eEmF

They definitely got a group chat behind his back this whole time lmao.

My face when all of Kelly’s assistant coaches decided to stay at Notre Dame and chase a Natty 🤩🤩 #FreemanEra #FBrianKelly pic.twitter.com/OAjHGY230i

Kelly trying to get Notre Dame assistant coaches to follow him to LSU. #GoIrish pic.twitter.com/VWFoEP2q8n

High-level coaching changes at this level are always a bit awkward. Kelly’s change, however, has gone worse than most. It wasn’t just that he essentially ghosted the entire school after the LSU news broke. He handled it poorly and awkwardly with players, and seems to have alienated a lot of people at Notre Dame. Maybe that’s why so few assistants are eager to follow him out the door.

In the end, this might not affect Kelly’s ability to win at LSU, but it doesn’t reflect too well upon the coach.

Tampa Bay Buccaneers wide receiver Antonio Brown has been suspended for misrepresenting his vaccination status, confirming allegations made against him previously. The indication that he used a fake vaccine card certainly undermines his defenses after those allegations first went public.

Brown’s attorney Sean Burstyn released a new statement on Thursday after the NFL handed down its suspension. While the statement does not admit wrongdoing, it certainly does nothing to dispute the NFL’s findings.

A statement from lawyer @seanburstyn, who represents Antonio Brown: pic.twitter.com/QruBfEZNBG

Burstyn says Brown is vaccinated, which multiple reports indicate is now true. We don’t know when Brown got the vaccine, though, so it may have taken place after these allegations went public.

The claim that Brown wanted to avoid a “drawn out and distracting process” by disputing the allegations also doesn’t hold up well to scrutiny. Brown was already poised to miss at least two more games with an ankle injury. His decision to accept the suspension means he’ll largely be missing games he would not have been healthy enough to play in anyway.

Brown, along with two of his teammates, were suspended for the same violation of NFL policy. Burstyn had responded to the initial allegations with a pretty bold claim to defend his client. It’s hard to take that seriously in retrospect.

Russell Wilson using another star athlete as inspiration amid struggles

Russell Wilson is enduring his worst professional season, as are the Seattle Seahawks. It’s the sort of adversity the quarterback is not used to, but he’s finding inspiration to overcome it in other places.

On Thursday, Wilson discussed the tools he uses to work toward overcoming the issues he and the Seahawks are currently experiencing. Unprompted, he brought up the Golden State Warriors and the resurgence they are experiencing after two down years.

“I love watching the Warriors play, for example,” Wilson said, via Adam Jude of the Seattle Times. “I think about their 2019 season. They went through some tough, tough moments there. But I also think about where they are today. I think about just how good they are and how Steph Curry kept battling in the midst of being injured or whatever it may be.”

The Warriors were the dominant franchise in the NBA from 2014 to 2019. That fell apart in the 2019-20 season, when the departure of Kevin Durant and major injuries to Curry and Klay Thompson resulted in a 15-50 record. They rebounded to finish 39-33 in 2020-21, and are now off to an 18-3 start this season. Curry has also come back from a broken bone in his hand to post two of the best seasons of his career despite turning 33 in March.

It’s easy to see how Wilson could take inspiration from that. On the other hand, there are some differences. For instance, Curry and the Warriors were and still are joined at the hip. In contrast, there are legitimate questions about Wilson’s future with the Seahawks. Plus, the Warriors’ down year was largely down to injuries, while the Seahawks have seen significant amounts of talent leave the organization on both sides of the ball. Any rebound will be down to roster improvements as much as health.

Lamar Jackson has scathing assessment of his four-interception game Baltimore Ravens quarterback Lamar Jackson had one of his worst games as a professional on Sunday, and he certainly knows it.

Jackson threw four interceptions in Sunday night’s game against the Cleveland Browns, though the Ravens overcame that in a 16-10 win. That did nothing to make Jackson feel better about it, and he described how stunned he was at his own performance when watching the game film.

“No excuses. That was just a bad performance. Four interceptions. Hope that never, ever happens again. Not ever.”

Credit to Jackson for being willing and able to say publicly what everyone knows. He is simply far too talented to be having games like that. It’s also good that he didn’t just chalk the performance up to a recent illness that sounded very severe.

Jackson has thrown 12 interceptions on the season to 15 touchdowns. Even though that total is inflated by Sunday’s game, it’s not really an inspiring ratio. That’s particularly true compared to his last two seasons, as it’s only taken him ten games to set a new career-worst interception tally. He’ll need to improve that going forward for the remainder of the season. 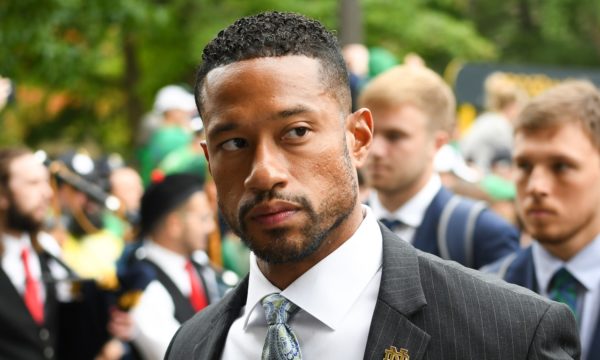 The Notre Dame Fighting Irish moved quickly to replace Brian Kelly, and are staying in-house to do so.

Notre Dame will promote defensive coordinator Marcus Freeman to the head coach position, as reported by Matt Zenitz of On3 Sports, among others.

Freeman is in his first season as Notre Dame’s defensive coordinator. He has made a strong impression this season as both a schemer and recruiter. The 35-year-old had previous stints as a defensive coordinator at Purdue and Cincinnati before joining the Fighting Irish. Freeman has a reputation as a rising star in coaching circles, and is considered an excellent recruiter. Kelly is a huge fan of Freeman, and reports suggested he had been trying to get Freeman to join him at LSU.

Freeman gets the job despite rumored interest in other more experienced coaches. It sounds like Freeman was also the preferred choice of Notre Dame’s current players as well.