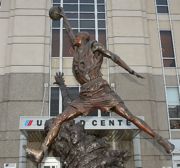 What would Michael Jordan be without Nike? What would Nike be without Michael Jordan? If M.J. got his way at the beginning of his NBA career, we would know the answer to both of those questions. In his new book “Dream Team,” author Jack McCallum talks about how Jordan and Nike came together back in the mid 1980s. As it turns out, signing an endorsement deal with Nike was initially the young star’s third choice behind both Converse and Adidas.

At the time, Magic Johnson and Larry Bird were both Converse guys. Adidas was viewed by many players as the company who made the best basketball shoes. Then, there were these Nike guys. After Jordan dominated the 1984 Olympics to lead Team USA to a gold medal, Nike wanted him badly. The feeling was not mutual, but His Airness eventually gave in after pressure from his parents and agent David Falk. When Jordan said he was going to skip a trip to the Nike headquarters in Beaverton, Oregon, his mother wouldn’t hear of it.

“You will be on that plane, Michael,” Deloris Jordan told him.

Nike had already decided to commit its entire marketing budget of $500,000 to build the Air Jordan brand. It worked. After a meeting in which Jordan was shown Air Jordan sneakers and apparel and having received no enticing offer from Converse or Adidas, he agreed to a five-year, $2.5 million deal with Nike. He hated the black and red shoes they made him wear and the NBA fined him $5,000 per game for them. Naturally, Nike paid the fine the entire time. The rest, as they say, is history.

There has never been and likely will never be a brand in sports stronger than the Air Jordan brand. It’s amazing to think that someone like Larry Johnson had to settle for Converse (as he told LBS in this interview) because Nike wouldn’t have him whereas M.J. had to be convinced. Perhaps they could have traded places. I’m sure the folks at Converse wish they had.