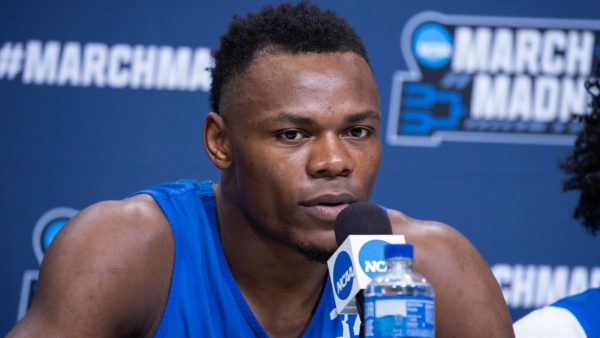 The Kentucky Wildcats had a disappointing end to their season after losing in the first round of the 2022 NCAA Tournament. Fans have had little reason to get excited about next season since then, but that all changed on Wednesday.

Kentucky forward Oscar Tshiebwe, the reigning National Player of the Year in college basketball, announced Wednesday on ESPN’s “SportsCenter” that he will be returning to Kentucky for his senior season.

“I’ll be back again. I’ll be here next year for Kentucky,” Tshiebwe said. “I’ll be in the blue in Kentucky next year again.”

Tshiebwe also posted this video on Twitter with a message saying that he’s back.

Tshiebwe had a dominant junior season, leading the nation with 15.1 rebounds per game. He also averaged 17.4 points per game.

The consensus first-team All-American won all six NCAA-recognized National Player of the Year Awards, including the Wooden Award and Naismith Trophy.

The 6-foot-9 Tshiebwe likely did not want his last college basketball memory to be a disappointing loss in the first round of the NCAA Tournament.

Second-seeded Kentucky was upset by No. 15 Saint Peter’s University in overtime, 85-79. The loss wasn’t due to a lack of production from Tshiebwe, however, who scored 30 points and grabbed 16 rebounds.

Tshiebwe’s decision makes him the first player to return to school after sweeping the National Player of the Year awards since North Carolina’s Tyler Hansbrough did so in 2008.

Hansbrough and the Tar Heels went on to win a national championship the following season, and there’s little doubt that Tshiebwe would like to do the same.