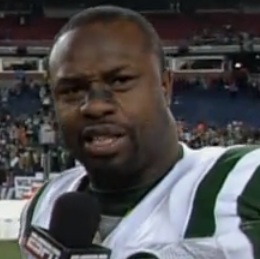 Bart Scott is not a Chip Kelly fan. In fact, he hopes the Philadelphia Eagles coach gets embarrassed to the point of losing every game this season.

Scott, the former trash-talking linebacker who made a Pro Bowl during his career with the Ravens and Jets, had harsh words for Kelly during an appearance with Evan and Joe on WFAN in New York Thursday.

“I’m rooting for the Jets,” Scott said of Sunday’s game against the Eagles. “Not just because I played for the Jets, but because I love a good car crash. I love a good accident waiting to happen. You have one guy who thinks he’s the smartest guy in the world. Trust me, I played for Brian Billick, so I’m used to being around guys that believe that they’re really smart, and Brian was. But come on now, are you kidding me? This guy needs to figure out what time to get a protein shake because obviously he’s giving the protein shakes at the wrong time, with his scientists and stuff that he has back there, because his teams aren’t ready to play in the first half.”

Scott was jabbing Kelly over all the nutritional changes he brought to the Eagles’ franchise when he took over the job a few years ago. Among the changes was giving players personalized smoothies based on their nutritional needs.

But the jabs didn’t end there. Scott joined the chorus of people bashing Kelly for letting so much talent go over the offseason.

“He can’t win,” Scott said as transcribed by NJ.com. “You know why he can’t win? Because you can’t win and tell people that you devalue great players and get rid of them just because you want to. So I think there’s a little bit of karma coming back to him. Nelson Agholor hasn’t replaced Jeremy Maclin. Jeremy Maclin was a class act guy. You can’t just replace people like they’re things, you know what I mean? Like they’re toys that you’re tired of playing with because you want something new. So I hope that he loses. I hope he loses every game.”

Kelly really rubbed people the wrong way with his offseason moves. Making such bold moves by getting rid of players like LeSean McCoy and Jeremy Maclin left him as a target for criticism if the team did not get off to a good start. That’s exactly what has happened so far, and now Kelly is becoming a punching bag. He better start winning otherwise he might be ostracized and end up back in college.