Video: Brandon Ingram is hitting the weights during his time off Brandon Ingram has been working hard to improve his physique.

Every player is working in the offseason now, not just on their skills, but their body. They know it’s the foundation. It’s a real requirement now, otherwise you get left behind.

Ingram was the No. 2 overall pick by the Lakers in 2016 and regarded as a talented player. He has a naturally skinny frame and is listed at 6-foot-7 and 190 pounds. If he’s able to beef up and add some muscle, that could help him as a player.

The 22-year-old is averaging 24.3 points, 6.3 rebounds, 4.3 assists and 1.0 steals per game this season, all of which represent career-high marks. He is in his first season with the Pelicans after being traded to New Orleans in the Anthony Davis trade. 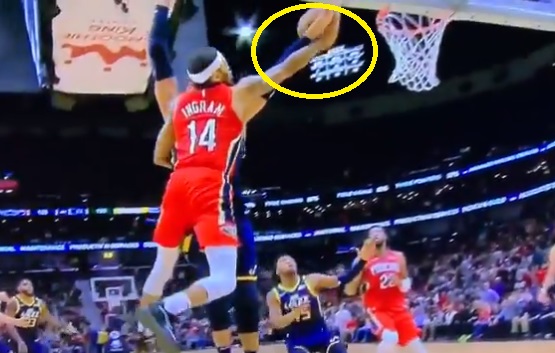 Brandon Ingram and Josh Hart seem to be happy about their trade to the New Orleans Pelicans.

Ingram posted a smiley face emoji on his Instagram Story not long after news of his trade to the Pelicans was reported.

Though Ingram had plenty of playing time with the Lakers, he has been a part of trade rumors for nearly two years and may find a measure of relief in finally seeing that come to an end. The same goes for Hart, who also may see an opportunity for more playing time now.

Only 21, Ingram is recovering from thoracic outlet decompression surgery in March. He was the No. 2 overall pick in 2016 and averaged 18.3 points, 5.1 rebounds and 3.0 assists per game last season, his third in the league.

Hart is returning from knee surgery. He was a first-round pick by the Lakers in 2017 and averaged 7.8 points per game last season.

The Los Angeles Lakers are involved in trade talks with the New Orleans Pelicans for Anthony Davis, and some information about players they’re willing to include in a deal is being reported.

The New York Times’ Marc Stein reported on Wednesday that the Lakers are willing to include Lonzo Ball and Brandon Ingram in deals, as well as the No. 4 overall pick in this year’s NBA Draft. Interestingly, Stein says it seems like the Lakers are trying to keep Kyle Kuzma out of trade talks.

My sense is that the Lakers, to this point, have tried to keep Kyle Kuzma out of the talks and the full package New Orleans would receive in an Anthony Davis deal obviously depends on what the third team provides

During the reported trade talks between the Lakers and Pelicans prior to the trade deadline earlier this season, the Lakers were said to have made nearly everyone on their roster available, including Kuzma. It’s unclear whether their mind has changed, Magic Johnson’s resignation, or any other factor is playing a role in this.

Kuzma and Ball are under team control for an extra year over Ingram, who was drafted the year before. Kuzma is also the cheapest of the three and a relative bargain at his salary. He is on schedule to earn about a third of what Ball will be earning on his rookie deal.

The big kicker that could affect a trade is the No. 4 pick. Stein believes if the Pelicans feel they can draft a potential All-Star with the pick, they would find a way to make a deal.

Los Angeles Lakers forward Brandon Ingram is expected to make a full recovery after undergoing surgery on his right arm.

According to Shams Charania of The Athletic, Ingram underwent thoracic outlet decompression surgery, but is expected to make a full recovery ahead of the start of next season.

Lakers‘ Brandon Ingram underwent thoracic outlet decompression surgery on his right arm and is expected to make full recovery for next season.

Ingram’s season ended prematurely earlier this month on account of a very serious and scary physical issue. It sounds as though the surgery was meant to correct this and the prognosis is good, which is great news for one of the Lakers’ young pillars going forward.

Brandon Ingram likely out for rest of season with shoulder issue

The team announced that Brandon Ingram has a Deep Venous Thrombosis in his arm, and is expected to miss the remainder of the season.

OFFICIAL: Brandon Ingram, who has missed two games due to a sore right shoulder, underwent further testing yesterday which revealed a Deep Venous Thrombosis (DVT) in his arm.

Ingram is expected to miss the remainder of the season.https://t.co/fNr8DwUbrb

Essentially, Ingram has a blood clot in one of his deep veins, causing soreness in his shoulder. This is obviously serious, but treatable.

This comes on the heels of the possibility of Lonzo Ball also missing the remainder of the season. Out of playoff contention, the Lakers are going to be very short-handed the rest of the way.

The Lakers beat the Boston Celtics 129-128 on a buzzer-beater by Rajon Rondo. Irving had made a layup just before Rondo’s winning shot, but he was just 6-for-21 and otherwise had a tough night.

After the game, he credited the “unusual” defense of the Lakers — singling out Ingram for his length.

Kyrie: "Being guarded by Brandon Ingram most of the game, I can’t even lie to you guys, those guys on the defensive end are unusual. Driving lanes that I see against every other team, they were closing down the lane."

For the Lakers to hear that about one of their players — and their defense overall — is a big compliment. Maybe Irving wouldn’t mind teaming with Ingram … and his old buddy LeBron James. Ingram was at the free throw line early in the Los Angeles Lakers’ game at Indiana. While at the line, Pacers fans taunted him with a “LeBron’s gonna trade you” chant.

The chant is in reference to Ingram’s name being part of trade talks between the Lakers and New Orleans Pelicans involving Anthony Davis and seems to be quite appropriate.

For those who haven’t been paying attention, this sort of thing is commonplace for Pacers fans. They taunted Kelly Oubre earlier this year, and they had an even better chant for Matt Barnes a few years ago.

10 NBA players off to a disappointing start

It’s far too early for any NBA fans to be panicking — we’re only three weeks into the season! But that doesn’t mean we should discount the start of the season entirely.

Some teams that were expected to contend for a top seed have fallen short of expectations (looking at you, Sixers, Jazz, Lakers, and Celtics). On an individual level, some players have also gotten off to a sluggish start. Here are 10 players who have struggled early in the season.

Gasol will soon turn 34, so we had to know his decline was coming soon. Unfortunately, it looks like the 7-foot-1 Spaniard only has a couple years left in the league. He’s still getting plenty of burn (32.4 minutes per game) and his rebounding numbers (8.9 per game) are respectable, but his offensive productivity and efficiency have dropped. His scoring average has been on a gradual decline since 2016, and it’s now down to 14.4 per game. He’s shooting only 42 percent from the field, the lowest number of his career. The Grizzlies are off to a somewhat surprising 6-4 start, and they could hang around the West’s eight-seed line – but they’ll need more output on offense from the skilled big man.

END_OF_DOCUMENT_TOKEN_TO_BE_REPLACED

Many observers were surprised by the relatively lenient suspensions resulting from the fight between the Los Angeles Lakers and Houston Rockets, and it turns out at least one player involved was among them.

Lakers forward Brandon Ingram, who threw a punch in the fight, only received a four-game ban. He admitted Monday that it was less than he was expecting.

Brandon Ingram on the suspension: “It was better than we expected. I’m happy it was only 4 (games). I have to control my emotions better.” He added that he apologized to his teammates.

Ingram actually got the longest suspension of anyone involved, as he threw an obvious punch without really being involved in the initial incident. Lakers guard Rajon Rondo got three games after allegedly spitting on Chris Paul and throwing the first punches, while Paul got two games for punching back. Nobody would have been shocked if those punishments had been twice as long, but the NBA clearly thought this was enough.