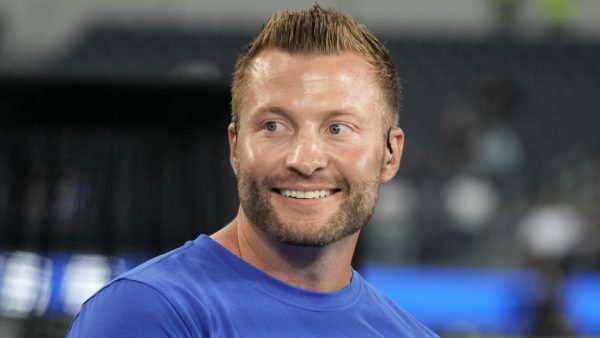 Mike LaFleur parted ways with the New York Jets recently following two rough seasons as the team’s offensive coordinator, but he has already landed another job.

There were rumblings almost immediately after LaFleur was fired by the Jets that he could join Sean McVay’s staff in L.A., as there are strong connections between the two.

The Rams needed a new offensive coordinator after Liam Coen returned to the same role at Kentucky. McVay’s team is coming off an uncharacteristically bad year in which they ranked 27th in the NFL with just 18.1 points per game. Injuries had a lot to do with that, but the Rams are hoping LaFleur can help fix their scheme as well.

The Los Angeles Rams are reportedly the favorites to land a fairly prominent offensive coordinator.

I’m told Mike LaFleur currently* “has the inside track” on being named the offensive coordinator for the #Rams, barring a pivot in communications since LaFleur has options, per league sources. Obviously nothing is ever done until papers are signed.

The Rams are in the hunt for a new offensive coordinator after Liam Coen opted to return to the same role at Kentucky. LaFleur was linked to the role very quickly once the Jets fired him at the end of the season.

LaFleur’s tenure with the Jets proved disappointing, particularly in his inability to develop quarterback Zach Wilson. However, he remains well-respected around the league, and the Rams may provide him with a more stable and established offense to work with. The New York Jets got off to a strong start to the 2022 season, but trouble was apparently brewing behind the scenes long before the losses began piling up.

Zach Rosenblatt of The Athletic on Thursday published an in-depth look at some of the in-fighting that went on with the Jets this year. One of the big takeaways was that New York’s wide receiver corps was not happy with the way former offensive coordinator Mike LaFleur simplified the offense when Zach Wilson was under center. No one expressed his displeasure more openly than Elijah Moore.

After the Jets improved to 4-2 with a 27-10 win over the Green Bay Packers in Week 6, a report surfaced that Moore had requested a trade. The former second-round pick was not targeted once in the game and did not seem to care about the result.

According to Rosenblatt, the trade request came after Moore blew up on LaFleur during practice the following Thursday. The former Ole Miss star is said to have surprised coaches and teammates when he told LaFleur “go f— yourself” and “you suck.” LaFleur and Jets head coach Robert Saleh decided to send Moore home, and he later asked to be traded.

The Jets refused to fulfill the request, and Moore and LaFleur eventually worked things out. There were no major issues the rest of the season. However, it is worth noting that Moore was not the only Jets receiver to demand a trade, with Denzel Mims doing the same over the summer.

LaFleur has since been fired, and even he admitted he had one big regret with the way Wilson was handled. Time will tell how big of a factor the offensive coordinator was in the Jets’ struggles.

The Los Angeles Rams are losing offensive coordinator Liam Coen, who is returning to the same role at Kentucky, and they may have a replacement in mind.

A few reporters said on Saturday that Rams head coach Sean McVay is expected to add Mike LaFleur to his coaching staff.

Garafolo added that “there will be many changes,” to the Rams’ staff.

ESPN’s Jourdan Rodrigue also reported that LaFleur was someone to watch for the Rams’ offensive coordinator job.

As Sean McVay gets his stuff and staff together, OC is going to be a priority on the hiring task list. One name to keep an eye on as far as external candidates go is Mike LaFleur.

LaFleur was fired by the Jets after the regular season. He had been their offensive coordinator for two years.

While the Rams have a vacancy for offensive coordinator, there is no guarantee that Mike would be hired into that role if he were to end up on the Rams’ staff. The New York Jets have made a big coaching change on offense.

While the Jets’ defense was fourth in the NFL in both points allowed and yards allowed this season, their offense struggled. The offense was 29th in points and 25th in yards.

Despite all the problems Wilson had this season, the team went 5-4 in his starts, though a lot of that success could be attributed to the team’s defense.

LaFleur, 35, served in his role as offensive coordinator for the Jets for two seasons. He began his NFL coaching career in 2014 and has worked for the Browns, Falcons and 49ers in addition to the Jets. He is the younger brother of Green Bay Packers head coach Matt LaFleur.

New York Jets offensive coordinator Mike LaFleur made an interesting admission about one big regret he had about the organization’s handling of quarterback Zach Wilson.

LaFleur admitted that the Jets made a mistake throwing Wilson into the fray as a starter in his rookie season. The Jets offensive coordinator voiced regret Thursday that the team had not sat Wilson for a while and allowed him to learn the league and watch a veteran from the bench.

LaFleur on Wilson: "In hindsight, it probably would have benefitted [him] just to sit back and learn a little bit and watch a veteran do it and just kind of grow in this league, kind of in the backseat watching and getting better in practice."

“In hindsight, it probably would have benefitted [him] just to sit back and learn a little bit and watch a veteran do it and just kind of grow in this league, kind of in the backseat watching and getting better in practice,” LaFleur admitted.

Wilson was the Jets’ Week 1 starter after they drafted him No. 2 overall in 2021. He started 13 of the team’s 17 games, with only a midseason injury taking him out of action.

The role of a rookie quarterback is up for debate, as some teams prefer to keep them on the bench for a year or two until they learn the league. The Chiefs did that to great effect with Patrick Mahomes, for instance. Each quarterback is different, however, and the Jets may have simply placed too much confidence in Wilson.

The Jets remain adamant that Wilson is still their quarterback of the future. If he does not work out, however, LaFleur’s take could lead to a lot of second-guessing.

The San Francisco 49ers understandably did their due diligence this past offseason after Aaron Rodgers asked the Green Bay Packers for a trade. While the two coaches have denied it, the inquiry may have resulted in some tension between Kyle Shanahan and Matt LaFleur.

LaFleur and Shanahan have long had a close relationship. On Wednesday, LaFleur was asked if that friendship was impacted by the Niners trying to pry Rodgers away from the Packers several months ago. LaFleur insisted it is not an issue.

“Kyle’s a great friend of mine,” LaFleur said. “I haven’t talked to him in a while. It’s just part of the business, I hold no ill will towards him. … He’s got a responsibility to everybody in that organization if he’s got an opportunity. I don’t hold that against him. That will have no affect on our relationship.”

That doesn’t mean the situation wasn’t awkward. According to NFL Network’s Michael Silver, Shanahan became upset over an exchange he had with LaFleur’s brother, New York Jets offensive coordinator Mike LaFleur, minutes before the start of the NFL Draft. Mike LaFleur reportedly needled Shanahan about his Rodgers trade inquiry, and Shanahan did not take kindly to it.

Here’s how the exchange was described to Silver:

6) The Jets, with the No. 2 pick, were expected to take BYU QB Zach Wilson. Shanahan joked to Saleh and (Mike) LaFleur: "I hope you guys don't take a different QB and cross us up. We haven't looked hard enough at Wilson."…

7) "What do you mean? You've already got your quarterback," Mike LaFleur replied to Shanahan. "Aaron Rodgers." Shanahan tried to brush it off as a joke, saying, "Hey, tell your brother to call me back. He hasn't returned my calls." LaFleur's response: "Can you blame him?"…

8) At that point, according to several people familiar with the call, Shanahan got visibly upset and hastily left the room. In his eyes, he had merely done due diligence on behalf of his franchise. But it was clear to all that Matt LaFleur viewed it differently…

8) At that point, according to several people familiar with the call, Shanahan got visibly upset and hastily left the room. In his eyes, he had merely done due diligence on behalf of his franchise. But it was clear to all that Matt LaFleur viewed it differently…

Rodgers is from Northern California. There had been rumblings that the 49ers were his top choice when he demanded a trade, so Mike LaFleur (and his brother) may have felt Shanahan and the Niners were toeing the tampering line.

For what it’s worth, Shanahan told “The Rich Eisen Show” after the draft that all he did was call Matt LaFleur and ask if there was any truth to the reports that Rodgers wanted out. LaFleur made it clear that Rodgers was not available, and Shanahan says that was the end of it.

Had it not been for LaFleur stepping in, Rodgers may have ended up playing elsewhere. LaFleur can’t possibly blame Shanahan for seeing if there was an opportunity to acquire one of the greatest quarterbacks of all time. But even if the two coaches understood one another, there still may have been some moments of tension while all the drama was unfolding.

Matt LaFleur is not afraid to take part in a bit of sibling rivalry with his brother Mike, especially when it comes to football.

The Green Bay Packers, coached by Matt, are set to take part in joint practices this week with the New York Jets, where LaFleur’s brother Mike is offensive coordinator. When Matt LaFleur was asked about the potential of Jets quarterback Zach Wilson, he couldn’t resist taking a shot at his brother.

Matt LaFleur on No. 2 overall pick Zach Wilson, who’s coming to Green Bay for joint practices this week: “He’s gotta make sure he gets the proper coaching up there. That’s the one thing I question.” pic.twitter.com/hAmLKiZDI7

It’s not just the LaFleur brothers in play here. Matt LaFleur and Jets coach Robert Saleh are very close. The two met as graduate assistants at Central Michigan and developed a friendship that even involved LaFleur being the best man at Saleh’s wedding. That just makes the comment even funnier.

LaFleur was on the receiving end of a shot from another coach he knows earlier this week. Clearly, he’s not going to be caught flat-footed in this humorous war of words.