A group of Miami Marlins fans decided to stage a protest of the franchise on Tuesday, but in typical Marlins fashion, the crowd was sparse.

Brendan Tobin, a producer at 790 The Ticket in Miami, decided to head down to the protest, which was publicized and organized on Facebook. He snapped the two photos you see of the five fans in attendance.

The fans have the complete right idea by protesting the team, but unfortunately they didn’t put together a very compelling crowd. We support their mission.

The Marlins deceived MLB and its fan base by re-branding last year with a new name, stadium, and uniforms, and by signing a slew of new players, and then blowing it all up after one unsuccessful season. That happened despite the team’s promise to the city, whose funds were used to finance the new Marlins Park stadium, that they would field a competitive team.

As if dismantling the team wasn’t deceitful enough, the fact that the Marlins backloaded their contracts to the players they signed last season made it seem like this was all part of a carefully planned backup option. Additionally, the Marlins come out looking extra slimy now that we’ve learned their agreement with MLB to spend their revenue sharing money expired right before they made the blockbuster trade with the Blue Jays in a massive salary dump.

It’s sad that only five fans showed up to protest the team on Tuesday, but what the Marlins have done to the fans is even sadder. Jeffrey Loria should be forced to sell the team. He is corporate evil personified.

Another photo via Tobin is below: 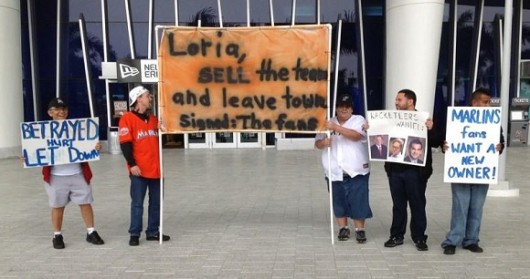